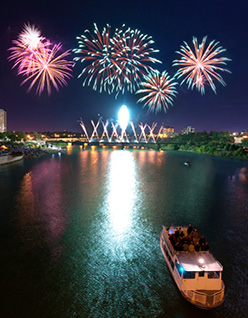 Imagine the potential. Your company participated in a conference with a thousand people, after which you walked 10 minutes along the river to your brand new hotel room, and grabbed your gear for world class fishing a short car ride away.

This is today’s Saskatoon reality, a city whose strategic tourism plan has married the region’s world class natural beauty with the amenities of Canada’s biggest commercial centres, offering experiences like this to visitors from across the country on a daily basis.

Todd Brandt is President and CEO of Tourism Saskatoon and has led the initiative to build the city’s capacity to host large commercial, corporate, sporting and leisure events and increase the city’s profile. Launched in September 2011, the city’s tourism campaign—Saskatoon is Calling—has global reach, and will emphasize the city’s ability to host major events, as proven by the city hosting the JUNOs, World Junior Hockey Championship, and the Brier (six times!), just to name a few.

It’s also the campaign that will bring the 2012 Canadian Country Music Association Awards (CCMA) to Saskatoon this September, marking the first time the city has ever hosted what is touted as “Country music’s biggest week in Canada.” This will directly benefit the economy of Saskatoon with its occupation of about 1,600 hotel nights and historical economic impact of $5 million to $7 million, according to CCMA data.

A membership-based non-profit organization, Tourism Saskatoon represents the interests of more than 430 local businesses, and is one of only six internationally accredited destination marketing organizations in Canada. Nicknamed “the hub city” for its numerous domestic and international transportation connections, Saskatoon is known for its expansive parklands and admired for its arts and culture scene, festivals and major sporting events.

“Our biggest challenge currently is keeping up with demand,” says Brandt. “The consequence of a strong economy, strength in multiple sectors has given tourism the opportunity to really shine in Saskatoon.”

Fresh on the heels of the Tim Hortons Brier, hosted by Saskatoon in February, it was estimated that the event brought in $17.4 million in direct spending (meaning money spent from people outside the province) and $33 million overall.

“We have had some strong years,” says Brandt, noting the city’s steady employment rates in a time of general decline elsewhere. “The results of this strength include our hotels having the highest occupancy rates in Canada for four consecutive years.”

The Saskatoon is Calling campaign has created demand and compression. “The hotels and airport having shown continuous growth between three to five per cent annually for years is a solid indicator of the success of the marketing campaign,” says Brandt. “Saskatoon is fast becoming one of Canada’s most impressive cities and Saskatoon is Calling emphasizes this extraordinary momentum and the city’s emergence as a prime meetings and convention destination.”

Saskatoon’s Credit Union Centre is one of the city’s premiere facilities, with 15,000 seat capacity (incidentally the largest non-NHL hosting arena in Canada, which has people thinking) and Prairieland Park, a 136-acre park that offers more than 200,000 square feet of conference space, attracting over 1.6 million annually.

The Saskatoon boom is unprecedented, given that only eight years ago the city had to do a major expansion on its airport to accommodate increased volume which has since been outgrown, prompting a $54 million terminal expansion.

“The growth is because of the opportunity of tourism and demand of the industry,” says Brandt. “It’s a consequence of a better confidence in our whole economy.”