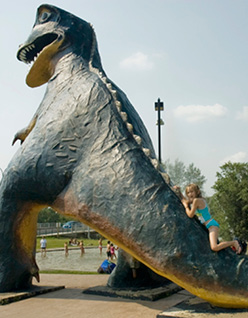 Dinosaur Capital of the World

The landscape of Drumheller, Alta. has transformed from an energy-based economy to one that thrives on the tourism industry.

Situated east of Calgary and home to about 8,000 citizens, the Town of Drumheller is rich in history. Today, the town sees its unique history as a ways to draw interest in its surroundings.

In 1884, geologist Joseph Burr Tyrrell was in search of coal in lucrative Drumheller, only to stumble upon dinosaur fossils, the first of such a discover in Drumheller and the Red Deer River badlands. Today, these artifacts are preserved in the Royal Tyrrell Museum of Paleontology. The facility is home to more than 130,000 unique fossils and serves as a major centre for both museum tourists as well as paleontological research.

Drumheller is open for business

Formerly the largest coal producing city in Western Canada, Drumheller now holds the distinction of being Alberta’s second largest natural gas deposit, the West Drumheller Field. While the economic engine of Drumheller has in recent years moved away from the energy sector and more toward tourism, the town certainly hasn’t forgotten its roots. This year, Drumheller celebrates 100 years in coal mining.

Terry Yemen, Mayor of Drumheller, told The Canadian Business Journal, “We have been very fortunate to be involved in the energy industry basically through our whole history, starting off with coal mines. When they died off in the 1950s, we had a bit of a lull, and the federal government was nice enough to build a federal institution here to help our economy until the oil and gas industry kicked in.”

That’s not the only development happening in Drumheller though. Additionally, the town plans to continue to be a service hub for the oil and gas industry, looking toward a future in Drumheller that emphasizes alternative sources of power, like wind powered electricity.

Yemen added, “We have quite a number of wind farms around the area and we’re hoping that will be a service hub for them.”

The town has also commissioned a new wastewater treatment plant in Drumheller, with a 20-year capacity. Drumheller will act as the regional hub for water, selling water to its surrounding municipalities, an entity which will surely serve the community well economically.

Another project in Drumheller will see the $23 million development of a community facility, something Yemen believes has been lacking in the area. A planned multi-use facility to host conventions up to 500 in capacity, the facility will offer another spoke driving Drumheller’s economic development.

Passionate and proud of its tightly-knit community, residents call home, “Drumheller is something to roar about”, alluding to the town’s dinosaur history. Around town, dinosaur statues can be seen. Drumheller is home to the ‘World’s Largest Dinosaur’, an 86-foot structure—roughly four times the size as a life-size Tyrannosaurus Rex—which allows guests to climb to the top of the dinosaur for an inspiring panoramic view of the Drumheller Valley.

While Drumheller is the third-largest tourist destination in all of Alberta, the town is moving forward to become a more vibrant community economically, however, Drumheller strives to expand its tourism season, which typically spans from May to September.

Meanwhile, another attractive tourism destination in Drumheller is the defunct Atlas Mine, which, by next year, will allow visitors to experience the complete darkness that coal miners used to work with when the mine was operational.

It’s quite interesting to note that a small town such as Drumheller draws more than 400,000 guests a year, to the aforementioned sites, as well as attractions like Horseshoe Canyon, Horse Thief Canyon, the Star Mine swinging suspension bridge (a 117-metre long pedestrian bridge), as well as theatre attractions like the world-renowned Passion Play, now in its 18th annual performance in Drumheller.

Undoubtedly, tourism had served and will continue to serve as a solid economic driver for the Town of Drumheller. 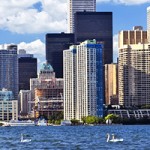 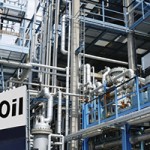