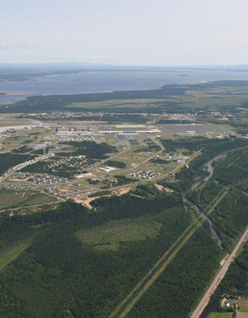 A few years ago, Leo Abbass, would never have dreamed one of the challenges he would face as Mayor of Happy Valley-Goose Bay, N.L., was overpopulation.

Located in the vast tundra of Labrador, the population of 8,000 has one of the lowest population densities in the country, and humans are outnumbered by migrating caribou (25 to one).

In the town’s short history—stated in 1941 and incorporated in 1971—Happy Valley-Goose Bay’s primary purpose as a town was as a fuelling and landing stop for the Atlantic Ferry and as home to the Goose Bay Air Force Base. The town has always had a relatively small population who are dedicated to the pristine beauty of their town, bookended by the scenic lakes and scenery, world class hunting and fishing and wilderness adventures.

Abbass came to Happy Valley-Goose Bay in 1978, has raised his four children here and has “absolutely no desire to leave. The quality of life I enjoy here is second-to-none.”

“I believe the opportunity that will happen here in the near future in regards to jobs and positions available to our young people will have the salaries and the benefits that will keep them in this area.”

The opportunity Abbass is referring to is a natural energy project that will, and already has, symbolize a new direction for Happy Valley-Goose Bay and a new employment sector that will change not so much the face, but the perception of the town from being an isolated community to a centre for employment and industry for the entire Labrador region.

As CBJ reported in 2011, “A massive hydroelectric project to develop Muskrat Falls, the lower portion of Churchill Falls in Labrador has been given the green light by the federal government. In a landmark deal, the provinces of Newfoundland and Labrador and Nova Scotia signed an agreement with Nalcor Energy and Emera to begin development of this $6.2 billion hydroelectric deal. With major investments from both Nalcor and Emera, the provinces are set to begin the process of appealing to the federal government for $375 million in federal infrastructure funding.”

The intent is to build a transmission link from Labrador to the island of Newfoundland for a cost $2.1 billion, of which Emera will invest about $600 million. Emera will, in return for its investment, receive 20 per cent of the energy from Muskrat Falls for 35 years. Muskrat Falls, Phase 1 of the two-phased project, will generate 824 MW of energy.

Slated to be online in 2017-18, the project must get underway in order to meet the schedule. Today, Abbass faces the challenge of providing housing and amenities for the hundreds of men and women who are working on the Muskrat Falls project.

“We are trying to prepare for what we believe will hit us like a ton of bricks in the very near future with an influx of people into town working on a number of projects that are going to have their home base here in Happy Valley-Goose Bay. We have a shortage of housing right now although we’ve taken steps. We are looking at medium-density housing developments for the very near future.”

Specifically, Halifax-based Shaw Group has been looking for temporary living conditions for its employees, though it withdrew a plan to build a work camp near a residential neighbourhood. Abbass is working with council to amend bylaws to approve work sites, and fund a zone that will allow this type of use.

“Once we get a zone that might allow a use like that, then I suspect that they will come back and talk to us and see if there’s land available to meet their needs,” Abbass told The Telegram on January 7.

“There is some commercial space around town but a very small section that we own and control,” says Abbass. “All the other land is crown land and that is a six-month process to acquire that land and some of the needs we have right now. Six months is going to put us in a situation where we are behind the 8 Ball so we are trying to mediate and deal with some of these concerns coming at us.

“In order for the project to go ahead these types of skills have to be employed and where they stay…that is where we are.”

Abbass is confident a working solution will soon be found, one that will facilitate a new era for the community whose proposed industrial energy rates will attract more business. “Once Muskrat Falls is completed we will have access to all the power we will ever want in Happy Valley-Goose Bay,” says Abbass. “One of the things we have talked to Nalcor about is an industrial rate associated with it that makes us competitive. We want to see a block of power earmarked for industrial development here in central Labrador and I believe that will attract business which will bring more workers and provide us with a sustainable future.”