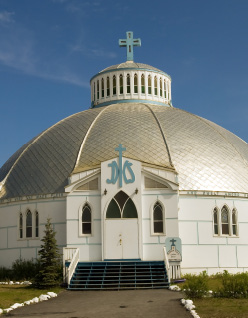 A hotbed of oil and gas activity in the frozen north

“Land of the Midnight Sun and Gateway to the Beaufort-Delta”, the northern town of Inuvik, N.W.T., is home to a growing and diverse population. Located on the rim of the Arctic Circle, Inuvik’s vast flat wooded plateau with northernmost reaches of the tree line at the east channel of the Mackenzie River Delta, 100 kilometres south of the Beaufort Sea, a hotbed of oil and gas activity lies beneath this frozen tundra.

In September, a huge gathering of representatives from the National Energy Board of Canada, oil and gas companies and environmental departments gathered in the town to debate and discuss offshore oil drilling. The purpose of the roundtable was to discuss government regulations and industry best practises. As spills in the Gulf of Mexico and New Zealand provided dark illustrations of the devastation a spill could entail, the community of Inuvik had been vigilant on ensuring the optimum safety conditions for oil exploration before it can begin.

“There is a lot to protect,” says Mayor Denny Rodgers. “This is a town of 3,500 with amenities for a much larger community; a six-year-old hospital, a new community college, hockey and curling rinks, etc., not to mention the beauty of the land and the ecosystem.”

The diversity of the community is also remarkably diverse for its remoteness, with a thriving Muslim community, and First Nations and Metis communities. “The amenities and amazing people we have it make Inuvik, in my opinion, the best kept tourism secret in Canada.”

In tourism, maybe, but anything but in the oil and gas industry, which sends over 500 delegates every year to attend the Inuvik Petroleum Show(IPO),held this year in June.  It’s a major event, with 100 trade show booths, developed originally to promote the Mackenzie Valley Gas Project, a proposed 1,196-kilometre natural gas pipeline system along the Mackenzie Valley of Canada’s Northwest Territories to connect northern gas fields with North American markets.

The project has been in the blueprint stage since the 1970s, and was looked at seriously until an inquiry conducted by Justice Thomas Berger declared that, due to inadequate consultation with Aboriginal and conservation groups, the project was premature. Effectively shelved since that time, the project was revisited in 2004, and, major improvements in corporate social responsibility and Aboriginal land rights,  this project is positioned to inject billions of dollars into the northern economy at its proposed start up in 2014.

“The National Energy Board, for whom we all have a tremendous amount of respect, took it upon itself to do a review [of offshore drilling and pipeline projects],” says Rodgers. “We, meaning Canadians, have some of the most stringent standards in the world and are fortunate that we do.”

The review is slated to be completed in December, before which it will analyse input and data from the industry and surrounding communities including Aboriginal leaders, hunting and trapping associations, who were invited to weigh in on the negative and positive effects of offshore drilling.

“The roundtable”, says Rodgers, “was great. A lot of people have voiced their concerns, some spoke passionately about the land, what it means, what an oil spill of any magnitude would do to the sea and communities on the coastline that rely on the sea for their livelihood.”

At the same time, you can feel an optimism. We know the importance of hydrocarbon and oil and gas when 80 per cent of the energy we use comes from that source. I think the concern is people want a comfort level, and that comes in knowing there are proper blowout preventers, systems for proper stoppage and clean-up if something, God forbid, were to happen,” he says.

“As long as you have the best possible regulations in place, then we are not opposed to drilling. We look to Norway as an example of a well regulated offshore oil industry that has not harmed other industries.  They have many rigs off the coast in the North Sea and there is also a thriving fishing industry up the coast. It can be done—but we must ensure it is done appropriately.”

The economic benefits would be “significant”, says Rodgers, despite Inuvik being an inland community, and would also mark a new way of partnering with major companies, who, in the 1970s did not regard corporate social responsibility the way it is now.

“It’s an opportunity to build trust back,” says Rodgers. “The way things were done 30 years ago when an oil company came in to drill is different now. Certainly I think it is safe to say decisions in the past for the North have been controlled a little by outside interests, is not the case now. Aboriginal and local governments are front and centre on what happens here on their land.”