CALGARY, Alberta, Jan. 17, 2023 (GLOBE NEWSWIRE) — Traction Uranium Corp. (CSE: TRAC) (OTCQB: TRCTF) (FRA: Z1K) (the “Company” or “Traction”), a mineral exploration company focusing on the development of discovery prospects in Canada including its two flagship uranium projects in the world-renowned Athabasca Region, is pleased to announce receipt of access and permission from the Saskatchewan Ministry of Highways allowing the Company to utilize a lease located near the Key Lake South Project (KLS) to use as a temporary drilling camp beginning February 1st, 2023 to July 31st, 2024.

Lester Esteban, Chief Executive Officer, stated, “After our team discovered the high-grade uranium mineralization (see Traction News Release dated November 13th, 2022) in the ‘black soil’ and the ‘radioactive swamp’, we have been busy preparing to drill underneath. The ‘black soil’ is of special interest to our team as this is not the first time it has been encountered, in the 70’s Uranerz encountered radioactive soil and drilled underneath, this led to the discovery of the Key Lake deposits. Access to our KLS Project is simple, right off the highway and lends to inexpensive drilling as we do not need helicopter support or ice roads to get to our project. Securing access with the Ministry of Highways to provide us with an area for a temporary camp off the highway means we can mobilize to KLS all year round.”

About the Upcoming KLS Drill Program:

Phase 1 Diamond Drilling is planned with 2,000 metres, targeting areas with extreme surface uranium anomalies including the “black soil” anomaly, the “radioactive swamp” and the “Athabasca Sandstone” mapped in 1973 (AR 74H04-0013). Most of the drill targets are situated at the edge of the broad gravity-lows identified in the ground gravity survey of 2022 (see Figure 1).

About the “Black Soil” and “Radioactive Swamp”:

The previously unknown radioactive anomalies discovered by Traction’s exploration team during the ground program of 2022 (see Traction News Release dated September 27th, 2022) were the “radioactive swamp” and “black soil”. Sampling of the “black soil”, where the horizon had an observed thickness of approximately 30 centimetres, returned 0.93 wt.% U308, 1180 ppm Cobalt, 625 ppm Nickel and 196 ppm Boron (see Traction News Release dated November 13th, 2022). Further sampling is required, the “radioactive swamp” is accessible in the winter when the swamp is frozen and may host uranium anomalies that may be similar to the “black soil”. An overburden drilling program is being considered to test for uranium mineralization near the surface, in the overburden/till. 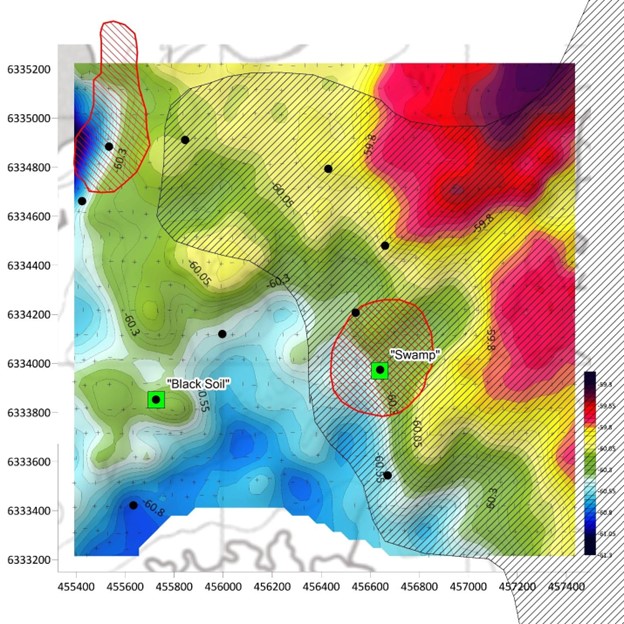 About the Property
The Key Lake South Uranium Project is located approximately 6 kilometers to the southwest of the Key Lake uranium mill and in close vicinity to modern uranium mining facilities and highway transportation in northern Saskatchewan. Geologically, it sits at the southeastern edge of the Proterozoic Athabasca Basin – home of the world’s largest and highest-grade uranium deposits and operations. Recent discovery of Triple R and Arrow deposits has demonstrated further potential of high-grade uranium at the edge of the basin.

About Traction Uranium Corp.
Traction Uranium Corp. is in the business of mineral exploration and the development of discovery prospects in Canada, including its two uranium projects in the world renowned Athabasca Region. The Company invites you to find out more about its exploration-stage activities across Canada’s Western region at www.tractionuranium.com.

Qualified Person
The technical content of this news release has been reviewed and approved by Linglin Chu, M.Sc., P. Geo., who is a Qualified Person as defined by National Instrument 43-101, Standards of Disclosure for Mineral Projects. The information provides an indication of the exploration potential of the Property but may not be representative of expected results.

On Behalf of The Board of Directors

The Canadian Securities Exchange has not reviewed, approved, or disapproved the contents of this press release.