CALGARY, Alberta, Aug. 02, 2018 (GLOBE NEWSWIRE) — TransCanada Corporation (TSX, NYSE: TRP) (TransCanada or the Company) today announced that the Board of Directors (Board) of TransCanada declared a quarterly dividend of $0.69 per common share for the quarter ending September 30, 2018, on the Company’s outstanding common shares. The common share dividend is payable on October 31, 2018 to shareholders of record at the close of business on September 28, 2018.

The Board also declared quarterly dividends on the outstanding Cumulative First Preferred Shares as follows:

These dividends are designated by TransCanada to be eligible dividends for purposes of the Income Tax Act (Canada) and any similar provincial or territorial legislation. An enhanced dividend tax credit applies to eligible dividends paid to Canadian residents.

The Board also approved the issuance of common shares from treasury at a two per cent discount under TransCanada’s Dividend Reinvestment Plan (DRP). Under the DRP, investors holding TransCanada common or preferred shares can receive common shares instead of cash dividend payments. For further details, including how to enroll in the program, please refer to TransCanada.com/Dividends.

This publication contains certain information that is forward-looking and is subject to important risks and uncertainties (such statements are usually accompanied by words such as “anticipate”, “expect”, “believe”, “may”, “will”, “should”, “estimate”, “intend” or other similar words). Forward-looking statements in this document are intended to provide TransCanada security holders and potential investors with information regarding TransCanada and its subsidiaries, including management’s assessment of TransCanada’s and its subsidiaries’ future plans and financial outlook. All forward-looking statements reflect TransCanada’s beliefs and assumptions based on information available at the time the statements were made and as such are not guarantees of future performance. Readers are cautioned not to place undue reliance on this forward-looking information, which is given as of the date it is expressed in this news release, and not to use future-oriented information or financial outlooks for anything other than their intended purpose. TransCanada undertakes no obligation to update or revise any forward-looking information except as required by law. For additional information on the assumptions made, and the risks and uncertainties which could cause actual results to differ from the anticipated results, refer to the Quarterly Report to Shareholders dated August 1, 2018 and 2017 Annual Report filed under TransCanada’s profile on SEDAR at www.sedar.com and with the U.S. Securities and Exchange Commission at www.sec.gov. 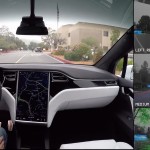 Tesla Shares Up Despite Record Losses