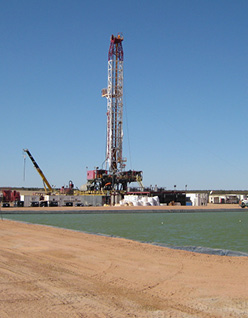 Transerv Energy (ASX:TSV) know how to find a good neighborhood. And, if surrounding plays are anything to go by, lately the Perth-based explorer has managed to snag some rich prospects.

The company has unconventional oil and gas interests in both their native Australia and Canada, and it is these more distant plays that are sparking so much interest.

Most prospective of all is the Duvernay play in Alberta which Transerv recently expanded by way of the purchase at auction of some adjacent land packages. A deal struck with Transerv’s partner in the play, Black Swan Energy Ltd, saw gains on all sides.

“It was a win/win for both of us,” says Keenihan. “We got to expand the area of mutual interest, we got some more land and we got a little bit of cash coming in” in the form of the reimbursement from Black Swan.

Black Swan are set to drill the land imminently, with further drilling and fracking likely to take place in the December quarter. Keenihan says Transerv is “quietly confident” of success, due at least in part to the success of the wells close by.

“We’re seeing high liquid yields — the key to making any of these tight gas plays work well. All those wells are yielding quite strongly with liquids suggesting there’s something worth chasing there. If you’re getting positive shows right from the beginning it’s quite encouraging.”

As for their Montney land holdings in neighboring British Columbia, Transerv are currently in the midst of locating seismic data to determine the best location to drill on the 20,000 net acres.

As for the Montney area itself “it’s a well-known zone with lots of gas production and as you move south of the Peaks River area to the north it’s known to be oil saturated,” says Keenihan. “Two miles from our blocks are drilled wells which are producing one to two million cubic feet of gas a day and 300 to 400 barrels of oil a day.”

Transerv are exploring the possibility of “inviting partners in” as they have already done at the Duvernay play to repeat the same kind of arrangement they already have with Black Swan.

“We’re looking for people who have the technology and the wallets to help us along. We’ve got the important ingredient, we own the land.”

Of Transerv’s land acquisition strategy Keenihan says “If the industry is looking left we are often like to look right to see what could be out there that’s not quite in their targets at the moment. We’re happy to move 10 or 20 sections away [from a successful play] and pick up more land but at a much lower price, so we’re looking forward to where the play might be rather than where people know it is right now.”

“We’re bringing an Australian exploration approach into the Canadian exploration scene. We’re more aggressive in regards to acquiring land and we’re willing to take more risks. Australians are used to owning large leases and having lots of running room as we say. If something happens we can then expand quickly into those areas and so far it’s worked very well for us.”

Closer to home, Warro, the company’s Australian play, has been beset by the issue of water production.

However, the Shanley review, conducted earlier this year by a team of America tight gas specialists, cast this in a new light, saying in essence that such water production was an “operational management issue” but that there were workarounds.

One of the report’s conclusions was that the likely source of the water – faults which show up on 3D surveys — could simply be avoided on a bigger field.
“We’ve got a lot of places we can go where there’s not so much faulting. We’re pretty confident that if we move away from the area that’s clearly faulted we’ll move into a zone where water production will be a lot better; it may still produce some water but not at high volumes.”

Other means of managing the water issue include submersible pumps, used in the US, which keep the water away from the gas.

“Lots of gas fields in the US produce water [in a similar way] and you’ll find a number of fields that produce water at higher rates than what we’ve seen; it’s really a case of how you manage it. Obviously there’s a disposal issue, but Australia is generally short of water rather than having too much.”

Water thus produced could be recycled for fracking, and perhaps ultimately used for agricultural purposes.

Work on the Warro play awaits word from Alcoa, Transerv’s partner in the area, which has already sunk a substantial financial commitment into the play, on the proposal put together by Transerv to drill two wells in early 2012, a decision due to take place towards the end of September.

“Then it’s off to the races,” says Keenihan. “We’ll be ready to go in regards to the mechanical side of rigs and that side of things, we’ll probably do some more work on the 3D before we finalise a location so when we choose a location we’re as confident as we can be that we’ve positioned it away from any faults.”

Transerv’s ideal timeline would be to drill, frack and test the wells in late 2012 and early 2013, a timeline which, driven by rig availability may “have drifted into the first quarter of 2013,” says Keenihan, “because there isn’t a rig available in Western Australia.”

“When we kicked the Warro project off we bought a drill from the USA and that came in and drilled about a dozen wells in Western Australia but eventually work for it dried up and it went across to Eastern Australia, where it’s now in fulltime use. So we are working with another operator to bring in another rig and rather oddly the rig we’d like to bring in, is coming from Canada.”