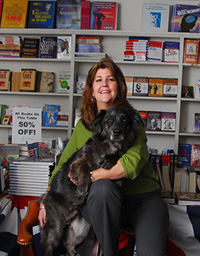 The power of the written word to educate, inspire and empower has been utilized for decades by successful businesses. This concept was the motivation behind starting Tremendous Life Books, formerly known as Executive Books. Company founder, the late Charlie “Tremendous” Jones, started the business back in 1965 as a wholesale distribution company of motivational books to businesses. After his passing in 2008, Jones’ daughter Tracey took over the company and rebranded the company as Tremendous Life Books to honour her father. Tracey spoke with The Camadian Business Journal about her father’s ideology, the company’s business model, and its plans for the future.

“Our founder used to say that you’ll be the same five years from now except for two things: the people you meet and the books you read,” says Jones, reflecting fondly on the influential man who started the company. This is the continuing philosophy of Tremendous Life Books, which today is a publisher and wholesale distributor of large quantities of motivational, leadership, executive, sales and personal growth materials. It includes collections of traditional books, as well as e-books or downloadable materials, audio books and DVDs. “Our authors are speaking to people who are looking to grow, to lead a better life, to be a better leader, and just to better themselves or be more “tremendous” in all aspects of their life,” states Jones.

The company has a particular niche as an in-house publisher and considers this an important part of the business model. It is always seeking that new and intuitive writer—the “up-and-coming”, as Jones says. As a publisher, it also accepts unsolicited manuscripts that don’t have a literary agent attached to it—an unusual practice for a publishing house. This competitive advantage, according to Jones, is one of the ways of discovering something extraordinary to publish.

“We really like authors that already have a niche, already have a following, and are very passionate about getting their message out,” Jones says. “Our ideal author is one that is a speaker—a teacher, a preacher, somebody that is getting out and sharing their message. My father always believed that anybody who is out there teaching and preaching really should have a book, something in print so that when they leave these people it is another venue for people to keep their words in their hands.” Not to mention, as she is quick to add, another valuable source of revenue.

The primary target audience of Tremendous Life Books is an executive one, including a large number of sales people, financial consultants, those in the medical field and entrepreneurs. “It is people that are just getting the most out of their life,” says Jones, noting that personal development is something with which its core audience is highly concerned.

The second branch of the Tremendous Life Books business is its wholesale distribution to companies, for which it maintains a very distinct advantage: a significantly lower cost. Companies or organizations that buy materials for training or recognition to give to clients can purchase at a 50 percent discount, and large company orders in the thousands can go at discounts as high as 70 percent. “When you’re talking about a big company such as Tyco or Giant Foods that really gets how books can help with in-house training and employee development, that’s a significant saving,” states Jones.

The last few years have been a time of struggle for Tremendous Life Books, not only from the economic downturn, but from the loss of the company founder. The influential founder was “the strength of the company and the best salesmen of books—bar none,” according to Jones. Through hard work, rebranding and optimism, however, the company is back on track and well on its way to prosperity. As of 2010, the company was able to turn a profit, is debt-free, and was able to donate $100,000 to its Tremendous Living Foundation—a fund created for scholarships, missions groups, and homeless shelters.

For 2011, Tremendous Life Books would like to continue its contributions to its foundation while simultaneously seeing its profit margins rise. Its strategic goal for the future is to emphasize its role as a publishing house more than a distributor and it is aiming to publish more of its own titles. It is also focused on fully transitioning everything over to electronic, downloadable formats. Jones also notes the company would like to set up some kind of continuity program for businesses and organizations and build more strategic marketing alliances.

Last of all, Tremendous Life Books has the desire to continue to help people understand the transformational power of books. As Jones states, “We can change the world one book at a time.”