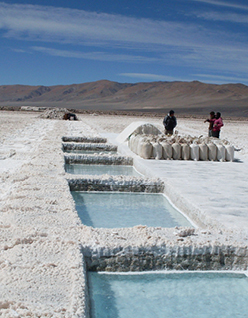 Argentinean miner Trendix S.A is standing out in early-stage South American exploration as it continues to discover a range of multi-commodity mineral deposits across its large native landholding.

As a South American early-stage explorer, born and bred, the story of Trendix S.A. (“Trendix”) began during the Argentinean mining boom of the early 2000s.

Today the company deems itself to be a “first-step” group with a track record in detecting  areas with positive elements, including attractive geology and geochemistry suggesting the existence of mineral deposits.

“At the time of our formation we had discovered a great project called Cordon de Esquel which contained more than four million ounces of gold,” recalls CEO and President Tomás Heredia.

“Since that time we have been dedicated to basic exploration.”

The founding Trendix partners have almost 30 years of South American exploration experience between them; a wealth of knowledge which has enabled the team to acquire a prospective portfolio of projects totalling 200,000 hectares across Argentina.

In addition to the core company speciality, metals, Trendix has kept its portfolio diverse across its landholding by including projects focused on other commodities including coal and perlite.

“Following a preliminary analysis of the available information at a site, we undertake all the initial basic research tasks to define [whether it houses] mining potential,” explains Heredia.

“From this point we can establish the existence of a mining prospect and it then becomes our task to find a partner with greater technical and financial capabilities to advance the next stages of exploration.”

Two of company’s current key projects —Cerro Choique and La Luz-Ivan Trend—represent the success that Trendix has had in applying this model; both are under exploration by foreign companies with the capabilities Heredia describes.

“We have other projects [for] which we also have high expectations,” he adds.

“Our geologist team has discovered the Valcheta project in the Rio Negro province, which we expect to contain significant gold and copper resources.

“Perhaps our most prominent project is the Ñirihuau Basin project with an estimated potential of at least 20 million tonnes of sub-bituminous coal.”

After the Rio Turbio mine in the province of Santa Cruz, the Ñirihuau Basin project is the second largest coal discovery in Argentina to date. Furthermore, unlike Rio Turbio,  the coal contained at this project also has features that make it suitable for consideration as coking coal.

Given the successful transition of Cerro Choique and La Luz-Ivan Trend into the hands of next-stage explorers, the high copper-gold expectations and Valcheta and the landmark potential of the Ñirihuau Basin project, it is clear that Trendix is more than a metals-focused native explorer; it is the first port of call for South American-focused groups looking for assets across diverse classes with truly outstanding project development potential.

Trendix has successfully dealt with the global economic crisis in a professional and profitable manner, and aggressive, ongoing ground activities across its tenements suggest that plans are in place to advance exploration efforts regardless of ongoing market volatility.

“The international crisis of 2007/2008 sent foreign investors away from Argentina, but our company was able to continue its activity,” confirms Heredia.

“Unlike other companies the crisis found us without debt, so it was possible for us to maintain and even strengthen our mining properties, as well as enabling us to continue promoting our projects to potential investors.”

Even during the depths of the crisis Trendix continued to sign contracts with international players.

“In 2008 we signed an exploration contract with purchase option, with the Korean oil company Golden Oil Corporation, which catered for the first exploration works at the La Luz-Ivan Trend project, located in the central Rio Negro province,” says Heredia.

“This is a project where important contents of silver, gold and some base metals such as copper, lead and zinc were found, as well as indium.”

“The results of the first exploration campaign—which included tasks such as geochemical and geophysical studies, drilling, trenching and detailed geology—have been very encouraging, which is why investment preparations have been made for the next phase of works,” he explains.

In mid-2011, the company signed an exploration contract with another foreign group, Malbex Resources of Canada.

“This project was initially discovered and explored by Trendix, and we were able to confirm the existence of a low sulfidation epithermal gold deposit of a ‘hot spring’ type,” Heredia says.

“We are confident that the next works to be carried out by our partner will be able to define a potential of at least 500,000 ounces of gold at this site.

“Despite unfavourable external and internal conditions, Argentina remains a country with enormous potential where you can still do good business—especially when it comes to mining,” he adds.

Golden Oil and Malbex aren’t the only foreign explorers to partner with Trendix. The company has worked closely with groups from the U.S., Australia and Canada, and has built up a reputation as a reliable Argentinean partner in the process.

“Our business is closely linked to foreign exploration companies and we work on two main lines of action. First, we offer to investment companies our own projects in order to obtain the necessary funds to continue the geological mining research,” explains Heredia.

“The second variant, also routinely used, is the promotion of third party projects on which we can guarantee property titles and at the same time ensure the existence of favourable geological conditions, to justify investment in exploration tasks forward in time.

But the mining business is not easy, Heredia reminds. Globally, it requires continuous learning and collaboration between first-stage explorers like Trendix, and those that rank highly in terms of technical and commercial expertise.

“Our main business is based on the supply of precious metals projects and we are confident that metals prices will continue their slow but steady increase in the coming years,” he says.

“We are among those who still believe that gold is definitely the best shelter in times of crisis.”

And with good reason. Argentina is South America’s second biggest gold producer after Peru, and the thousands of ounces of yellow metal potential housed within Trendix’ tenements are likely to be attractive to a host of mine developers.

The company’s strategic approach to partnering with such firms—and to securing  much-needed investment—has already served it well. Equally, the non-metallic discoveries made to date further suggest that as an explorer seeking to deliver key early-stage projects to the right groups, the company has not only insulated itself from financial pitfalls; it has continually proved how capable it is as a multi-project, multi-commodity hunter, and how ideal a partner it can be.

Heredia says that Trendix has plenty of plans in the pipeline–not least taking Valcheta to the next stage of exploration by proving its economic viability as a future project, establishing export contracts with a view to becoming a leading producer-exporter of perlite and setting up a carbon project.  Put simply, if you’re looking at early stage exploration in Argentina, Trendix is a well-respected company to consider, and as the country emerges as a choice mining destination, this company can look forward to more projects, partners and noteworthy discoveries.