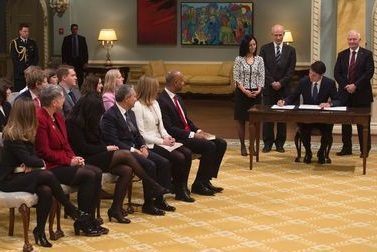 CBJ — Prime Minister Justin Trudeau has made several notable cabinet changes in what is a very transparent attempt to better deal with the incoming U.S. administration led by President-elect Donald Trump.

Trudeau has named Chrystia Freeland his new foreign affairs minister, taking over from Stephane Dion, who almost certainly would not have dealt well with the blustering persona of Trump.

The 48-year-old Freeland, a former economics journalist with extensive contacts in the United States, leaves the trade portfolio to replace Dion, who for all intents and purposes has been pushed out of the government’s inner circle.

Dion’s tenure at Foreign Affairs has been a rocky one, marred by controversy over his approval of a $15-billion arms deal with Saudi Arabia. His prickly demeanour was also seen as ill-suited to dealing with the unpredictable Trump, who has demonstrated a tendency to easily take offence.

Ahmed Hussen, a Somali-born rookie MP first elected in 2015, is one of several new faces in cabinet that include Quebec MP Francois-Philippe Champagne, named international trade minister, and Karina Gould of Burlington, Ont., who takes Democratic Institutions from Maryam Monsef.

Patty Hajdu, a strong performer who shone as status of women minister, is taking over the labour portfolio from MaryAnn Mihychuk, who is being dumped from cabinet altogether.

Monsef — widely criticized for her handling of Trudeau’s promise to reform Canada’s voting system — is moving to replace Hajdu at Status of Women.

Hussen is taking over the immigration portfolio from John McCallum, who is also quitting politics in order to become ambassador to China.