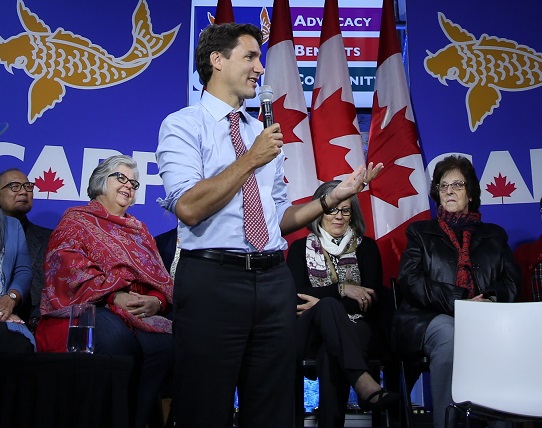 CBJ — For the second time in Canadian history a member of the Trudeau family is going to serve as prime minister.

Justin Trudeau’s Liberal Party will form a majority government, knocking Stephen Harper and the Conservatives out of control and into the role of Official Opposition. The Liberal victory is by no means a surprise, but the majority mandate caught many people off guard. The Conservatives will be choosing a new leader with Harper stepping down.  An immediate search is now on for an interim leader. Even had Harper won a minority mandate many believe he still would have stepped down.

It’s an historic win for the Liberals, who are leaping from third place to the ruling government. The Trudeau family is moving back to 24 Sussex Dr. for the first time since Justin’s father Pierre Trudeau was in power until retiring from politics in 1984. It’s also the first time both a father and son have held Canada’s preeminent political position. The elder Trudeau was first elected to a majority government 47 years ago, back in 1968. He died in 2000.

On several occasions throughout the marathon 78-day election campaign, the 43-year-old Trudeau fondly mentioned his father and his legacy. But political observers say it’s not just the Trudeau name that helped the Liberals regain power after a humiliating slide in the 2011 federal election.

Trudeau, billing himself and the Liberals as the only path to “real change,” was able to convince voters across the country that he was ready to lead the country — despite what the attack ads claimed.

Some of Harper’s most well-known, experienced MPs also went down to defeat in their own ridings.

Of equal surprise was the dismal showing of the NDP from coast to coast. It’s leader Tom Mulcair barely managed to hang on to his own Montreal riding of Outremont.  His downfall has been attributed to taking a firm position that women should have a right to wear face-covering veils at citizenship ceremonies. Polls have shown strong support for niqab bans in Quebec. Despite holding his own seat it’s hard to imagine he will continue on as leader of the NDP after Monday’s debacle.

The once powerful Bloc Quebecois and Gilles Duceppe also had a disastrous evening. They won 10 seats in Parliament, but Duceppe failed to win in his riding, which means he will all but certainly step down as leader. This Tweet was posted by W. Brett Wilson. “Looks like the BQ are now all but relegated to history books. Given my love of Canada as a nation – I am delighted to close that chapter.”

When all the votes were counted in the country’s 42nd national election, Trudeau’s Liberals landed 184 seats, with 170 needed for a majority in Parliament. Harper’s Conservatives ended up with 99 seats, followed by the NDP at 44, the BQ with 10 and the Green Party with one, thanks to party leader Elizabeth May who held her seat in B.C.