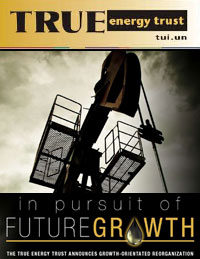 The True Energy Trust is an oil and gas exploration and production trust based in Calgary, Alberta.

‘True is powered by a diverse asset base, focused on sustainable growth both in its people and in its properties. True has a significant multi-year drilling inventory of locations in Alberta, Saskatchewan and British Columbia’ their website says.

The Trust, formed in 2005, focuses on these regions, including some assets in the Peach River Arch region of BC.

Planning and presenting for tomorrow
The company clearly states their ongoing objectives in their company presentation as:
• Operating Within Cash Flow: Targeted reductions in G&A and operating expenses in early 2009, Staffing levels and costs reduced by approximately 30 per cent, maintaining an active hedging program to mitigate vulnerability to negative commodity price fluctuations.
• Controlled Capital Program; Total capital budget for 2009 of approximately $15 mm
• Production Base Focus; Continued optimization, maintenance programs and production tie-ins
• Continued Debt Management; Reduced debt by $61 million over the past two fiscal years while paying distributions, reduced debt in June/July of 2009 by an additional $101.5 million

The presentation goes on to lay out their growth formula too:
• Inventory of low risk development locations; 320 locations, Over 5 years of drilling inventory
• Unrisked production adds of 15,400 boe/d
• Extensive undeveloped land base of 274,000 net acres
• Large geophysical database; Over 1,300 km2 of 3D seismic, 32,900 km of 2D seismic

The company, headed by Raymond G. Smith, President and CEO, is in an excellent position from which to execute these plans. Their new management team offers a combined experience of over 175 years, they have a stable production base of 6,500 boe/d, 61 per cent of their production is now operated, they have a large undeveloped land base of 274,000 net undeveloped acres, a significant inventory of drillready locations and tax pools of $400 mm.

True Energy is committed and growth-orientated in their aims and activities, but these focuses are just the beginning.

On May 1 2009 it was announced that Baytex Energy, an oil and gas income trust, had entered into an agreement with True Energy to acquire their oil and gas assets in the Kerrobert and Coleville areas of southwest Saskatchewan and gas assets located in the Ferrier area of west central Alberta, Canada for $93 million Canadian Dollars. This divestiture of the majority of True Energy’s oil and natural gas assets in the area allowed the company a significant reduction in net debt which has left them wellplaced for their next move.

The growth-oriented reorganization
On August 19 True Energy Trust made another pivotal announcement. The company said that it now plans to convert to a growth-oriented exploration and production company. Under this reorganization, unit holders of trust units in True Energy Trust will receive Common Shares in a brand new corporation on a one-forone basis. Those with Exchangeable Shares in True Energy are set to be able to change these for Common Shares in this new company based on the
current ratio of the Exchangeable Shares. According to the True Energy press release, the new company will have ‘78.8 million Common Shares issued and outstanding after closing.’

The True Energy management and Board of Directors have taken various measures to ring about the restructuring of the company operations.

‘Management is now comprised of a proven team of professional management in all key operational areas of the organization including a team experienced in providing organic growth through full cycle exploration, exploitation and development’ the press release states.

‘Commencing in the first quarter of 2009, the Trust implemented a cost control strategy and has reduced operating expenses and general administrative expenses in excess of 30 per cent from 2008 level.’

‘On August 17, 2009, the Trust finalized new $85 million credit facilities consisting of a $10 million demand operating facility and a $75 million extendable revolving term credit facility, with the borrowing base subject to redetermination on March 10, 2010’ the press release continues.

‘As a result of significant steps taken in 2008 and 2009 to improve its balance sheet by reducing outstanding indebtedness and streamlining its
operating cost structure, the Trust now has the financial flexibility to pursue a business plan as a growth-oriented exploration and production company with a strong balance sheet.’

Two things ring out in True Energy’s latest announcement. The first is the company’s enviable ability to stick to strategic goals regardless of economic climate or other such unforeseen changes and the second is their overwhelming commitment to their shareholders. This latest move is a very exciting development for them and the True Energy Trust are set to make some great changes in pursuit of further growth over the coming year. 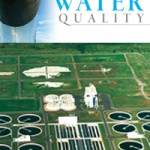 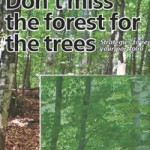 Don’t miss the forest for the trees