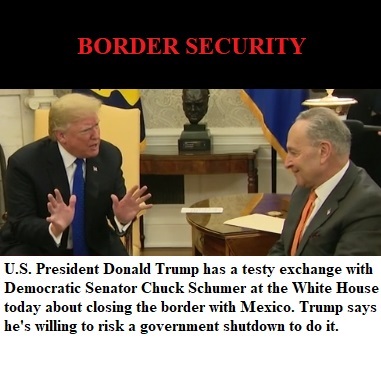 CBJ — There was an explosive, fiery exchange at the White House on Tuesday between President Donald Trump and Democratic Senate Minority Leader Chuck Schumer and presumptive incoming Democratic Speaker of the House Nancy Pelosi that spiraled out of control over border security funding and building a wall along the border with Mexico.

With a potential government shutdown looming less than two weeks away, Pelosi told Trump, “you will not win” on the border wall. The president demanded border wall funding — and said he’s not afraid the shut down the government over it. In fact, he said, he’s proud to do so, and will take credit for it.

Trump is pushing for $5 billion for a border wall with Mexico. Government funding runs out on December 21.

Suffice to say, little was accomplished from the meeting at the Oval Office, with both sides convinced they are right.