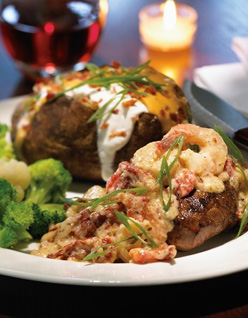 Since 1992 Turtle Jack’s has been committed to providing its guests with the best dining experience possible. By using only the most flavourful, highest quality ingredients and cooking all food fresh to order, the culinary team provides a dining encounter like no other.

Today, the brand continues to uphold its reputation for quality dining, but has since evolved into a destination for premium, casual dining. Turtle Jack’s Muskoka roots and lively, engaging atmosphere continues to provide its guests with a superior dining experience suitable for any occasion.

Turtle Jack’s Appleby will be the 15th location with the 16th opening this spring in Brampton, Ont. Turtle Jack’s locations cover the Golden Horseshoe, with several locations across the Greater Toronto Area, Kitchener, Guelph, and of course in the heart of Muskoka in Port Carling.

2012 marks the 20th anniversary of Ontario hallmark restaurant Turtle Jack’s. With a return to the original location that started one of the most successful food and beverage chains in the province, a number of new locations opening and a revitalized branding, Turtle Jack’s is the new kid on the block— again.

When Turtle Jack’s opened its first location in Brampton, customers flocked to the Muskoka roots and exceptional food quality. By using the highest quality ingredients and cooking all orders fresh to order, Turtle Jack’s immediately stood out, quickly gathering momentum with new customers.

The Canadian Business Journal spoke with Turtle Jack’s COO Clark Lishman about the success of the revitalized brand, expanding location roster and return to its roots. “In 1992, when we opened the original Turtle Jack’s, the roadhouse was king,” says Lishman. “We became quite popular among the beer and wings crowd at that time.

“In 2002, the Turtle Jack’s management team, part of the Tortoise Restaurant Group, saw the market started to shift and we saw the consequences of other players in the food and beverage sector that did not accommodate that shift. “At that point, we saw niche available to us, a fresh causal market that no one was taking advantage of,” says Lishman.

“Now we have seen the entire market is shifting to that way. Our competition pool was non-existent five years ago and we now see many players trying to break into it.

“We work under the philosophy if you don’t grow or continue to change your brand you are going to flounder, so we have worked hard to always evolve with the demands of our customers to provide the best dining experience possible.”

And what customers have demanded is premium quality and a unique and welcoming atmosphere. In January, Turtle Jack’s held a three-day strategy meeting which included more than 75 people from the company. From this, Turtle Jack’s developed its vision statement: Through a passionate commitment to fresh quality ingredients, our exceptional team will provide the best dining experience to every guest, every time.

“Throughout the evolution of Turtle Jack’s, the thing that has always stayed true with us is fresh food, quality food,” says Lishman. “We’ve never changed that philosophy. What I believe we have done is brought the interior and exteriors of our restaurants to equal our food package and diversified our menu from the original stores.”

While remaining stalwart to this commitment to quality dining, Turtle Jack’s has evolved into a premiere dining destination, engaged in its Muskoka roots and upscale atmosphere that can be encapsulated in three words: premium casual dining.

“We want to tie in the feeling of Muskoka summers to our brand,” says Lishman. “Live Ontario, be Ontario, is part of our summer campaign. Because that is a big part of who we are—the only Ontario-based brand in our niche,” he continues, noting Moxie’s, Earls, Milestones, etc., are all west coast brands.

Lishman says the refocusing strategy has been “great”, noting that Turtle Jack’s remain in the Top 3 highest performing restaurants during the recession with the majority of its stores posting continuous positive growth.

“The [recessionary] period of pulling in our drawstrings brought us to the idea that we have to get focused to the ambiance needs to match our food quality,” says Lishman.

To give back to the Turtle Jack’s loyal customer base, the restaurant has developed the Turtle Jack’s Loyalty Club (TLC) card. This program is the first and only loyalty card program within the hospitality industry.

The TLC program allows guests to collect points from their visits, which translates into money they can use towards their next bill. For every $1 spent at Turtle Jack’s, guests receive one point on their TLC card. When a guest reaches 150 points, those points translate into $10. Customers can then use the money they collect toward their bill.

Perhaps the most symbolic market of Turtle Jack’s success is the scheduled opening of a new location in Brampton, home of the first location, and the new location in Burlington, home of the company’s second ever location. “It was the best opening we’ve ever had in terms of sales numbers,” beams Lishman. “It’s exciting to see the brand grow and opportunities for us grow.”

Lishman says that all new locations will have the new Turtle Jack’s façade, and will be in larger locations that average 6,200 square feet. Any location with the old branding will either get remodelled or turned into a new concept for the company which is a smaller local Eatery & Refuge built to continue to grow as a franchise vehicle in Toronto.

With new locations opening in the next 12 months in Ontario, there is no slowing down for Turtle Jack’s. Slowly and steady, Turtle Jack’s is winning the race.