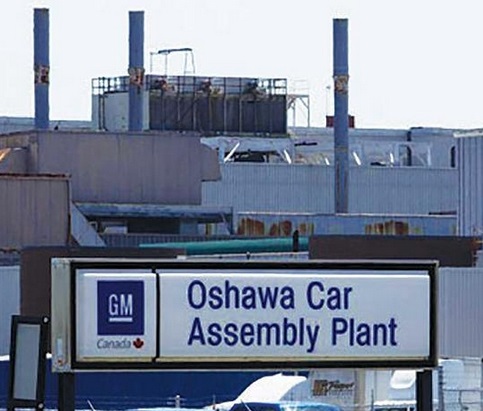 CBJ — The union representing thousands of autoworkers is vowing to fight back against General Motors’ plan to close its Oshawa plant in 2019 as part of a global restructuring plan.

It’s not certain how many of the 2,500 labourers and 300 salaried employees will definitively lose their jobs under the sweeping strategy, which GM says aims to lower carbon emissions and prepare for a future of electric and autonomous vehicles.

Unifor, the union representing the Oshawa autoworkers, says it will do everything in its power to save the jobs.

Jerry Dias, national president of Unifor, criticized GM’s move, which he says violates its agreement with workers, and praised those who work at the plant, which is 60km east of Toronto.

“You’re the number one plant that [GM's] got,” he told the crowd. “They are not closing our damn plant without one hell of a fight.”

When GM confirmed the closure in a statement it said the company is exploring options to retool the facility. However, there are no guarantees. The facility could be retooled and given newer vehicles to assemble, or the plant could shut down entirely. However, even in a best-case scenario, it’s unlikely that nearly as many labourers would be required with the new lineup of electric and autonomous vehicles, should GM ultimately decide to retool the plant.

The bad news is by no means restricted to just Oshawa and surrounding areas, including feeder companies.  General Motors is closing a total of five North American plants and will reduce its salaried workforce by 15%, including a quarter of the company’s executives. As many as 14,000 jobs in total could be on the line.