Recent boulder sampling has discovered multiple new lithium-bearing boulder trains that are not related to previously drilled lithium-bearing pegmatites. A potential source to the north and to the west of the drilled pegmatite is suggested, where sampling and mapping continues

Soil sampling has commenced, and first batch of samples have been sent for assay

VANCOUVER, British Columbia, Sept. 30, 2021 (GLOBE NEWSWIRE) — United Lithium Corp. (CSE: ULTH; OTC: ULTHF; FWB: 0ULA) (“ULTH” or the “Company”) is pleased to announce the first results from ongoing boulder train mapping and sampling at the Bergby Lithium Project in central Sweden. Excellent results have been returned from an area west of the northern end of the previously drilled lithium mineralized pegmatite. These new boulder trains are not related to drilled mineralization and are believed related to new lithium mineralized bodies.

Furthermore, a soil sampling program has been completed in the vicinity of the interpreted source of the northern spodumene boulder train. Samples were dried and sieved with -63 m fraction sent to ALS Limited for analysis including Li-Ta-Cs-Rb.

“Recent mapping and sampling has greatly expanded the footprint of lithium mineralized pegmatite at our Bergby Project” states Michael Dehn, President and CEO. “An extensive area has been identified with spodumene bearing boulders, and we see significant potential to find multiple lithium bearing pegmatite dykes. We have consequently expanded the claim holding at Bergby to secure additional targets. Our mapping and sampling shall continue as long as weather permits, and drilling is expected to continue at least until year end.”

“Sweden needs more mines to cope with climate change,” says Löfven. “Employment and business policy need to be intertwined with the climate issue.” We at United Lithium see this as positive support from the Swedish Government for future mine development in Sweden for lithium minerals. 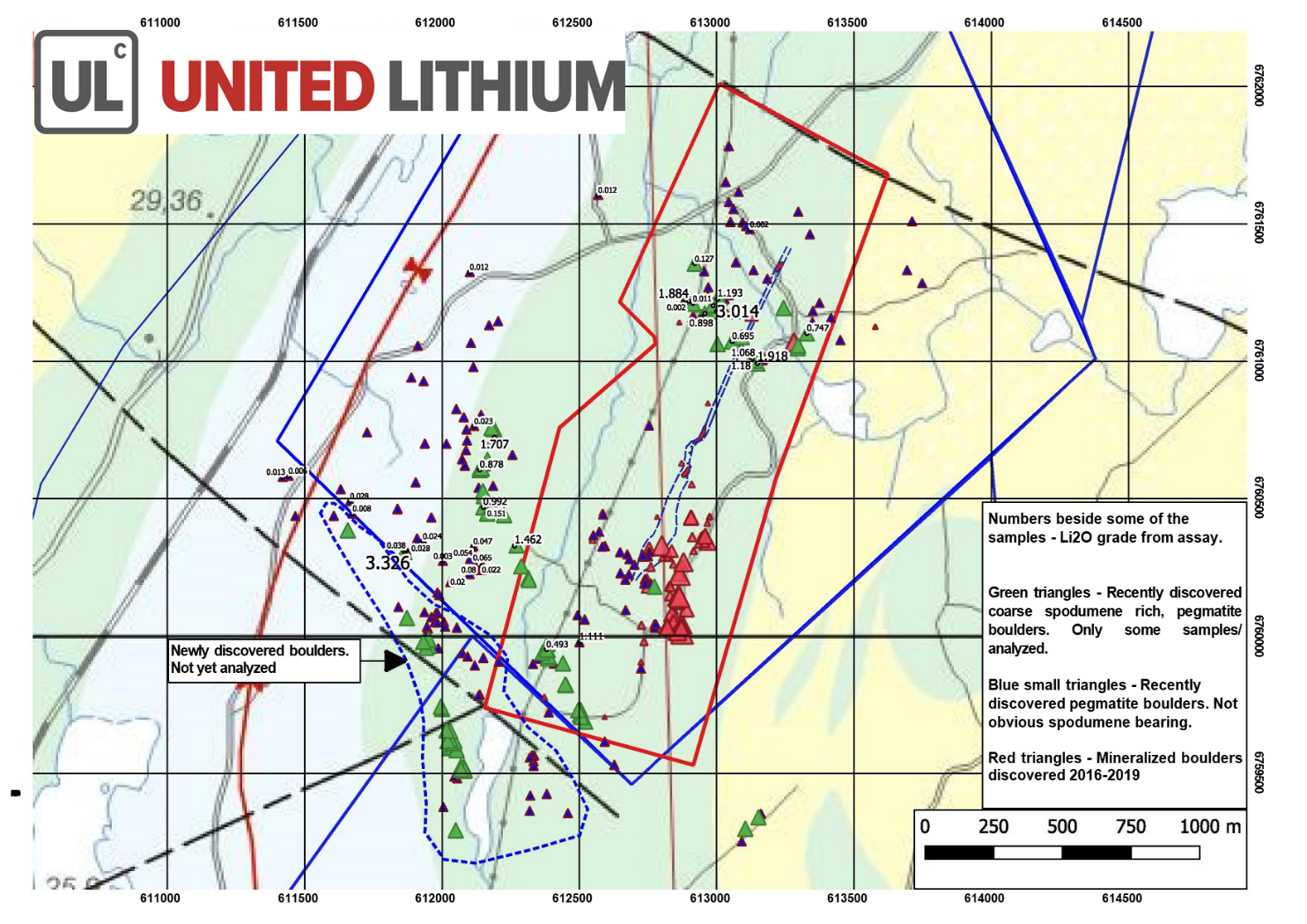 Core drilling is also well underway. A core logging and cutting facility has been established at the Port of Norrsundet, only 4km SW of the where drilling is occurring. Logistics are excellent, with infrastructure in place at the Port for most potential industrial applications. (see Figure 5.) 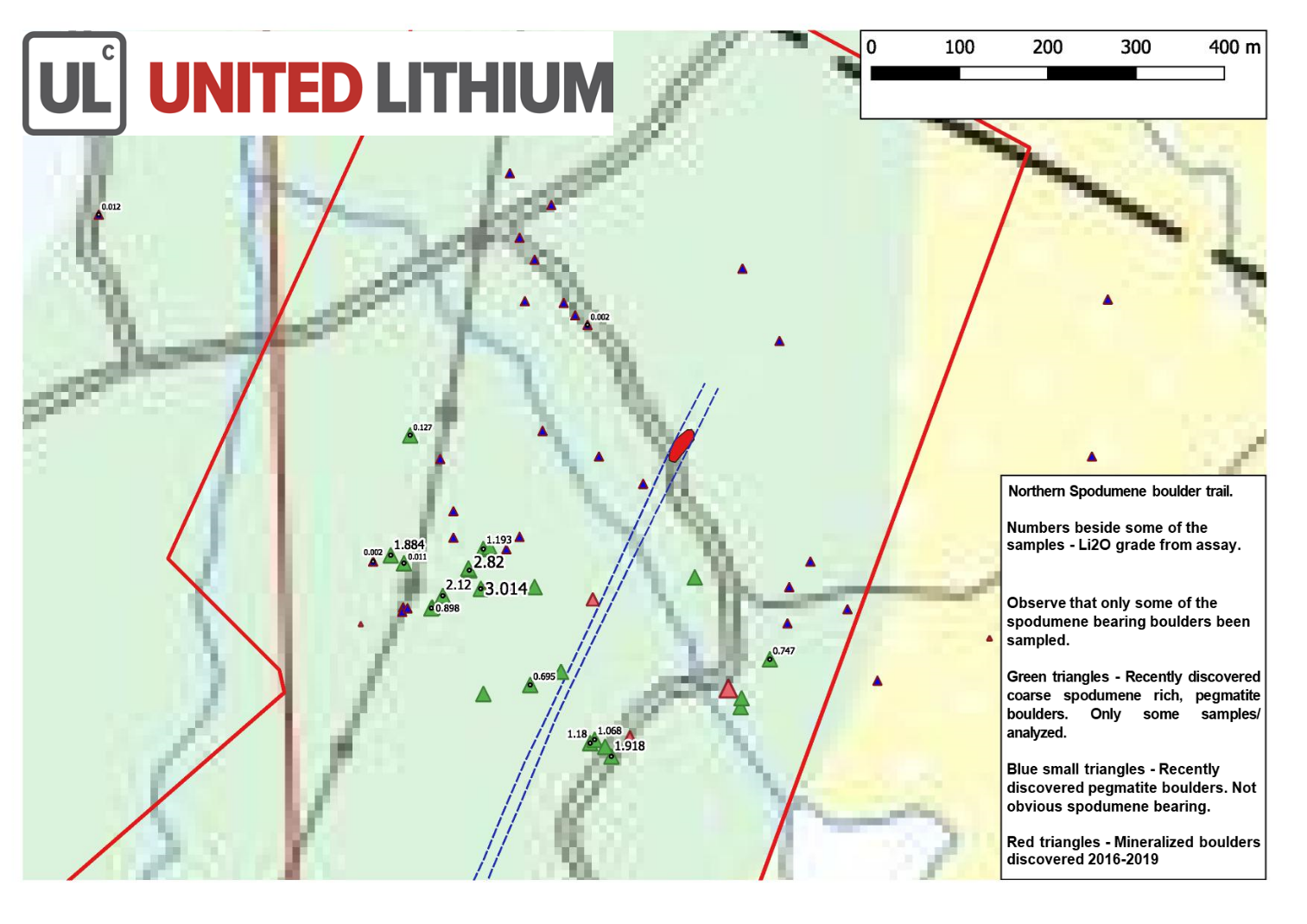 Bergby was discovered by the Leading Edge Materials team early in 2016, and has already thrown up both high grades and a high hit rate of potentially mineralized pegmatite.

Bergby lies in central Sweden, 25km north of the town of Gavle, initially secured by three exploration permits that covered a total of 1,903 hectares (Bergby nr 1, 2, and 3).

The site is close to infrastructure, with major roads, rail and power supply passing immediately adjacent to the Bergby project.

The Bergby Project was acquired by United Lithium from Leading Edge Materials in April 2021 when the property consisted of four exploration permits (Bergby nr 1, 2, 3 and 5) for a total of 3,155 hectares.

Recently the company applied for and was granted Bergby nr 4, 6, and 7 contiguous to the initial four exploration permits based the United Lithium suspicion that the mineralizing system at Bergby in much larger than previously thought. The total Bergby Project area is now 10,458 hectares (see figures 4 and 5.) 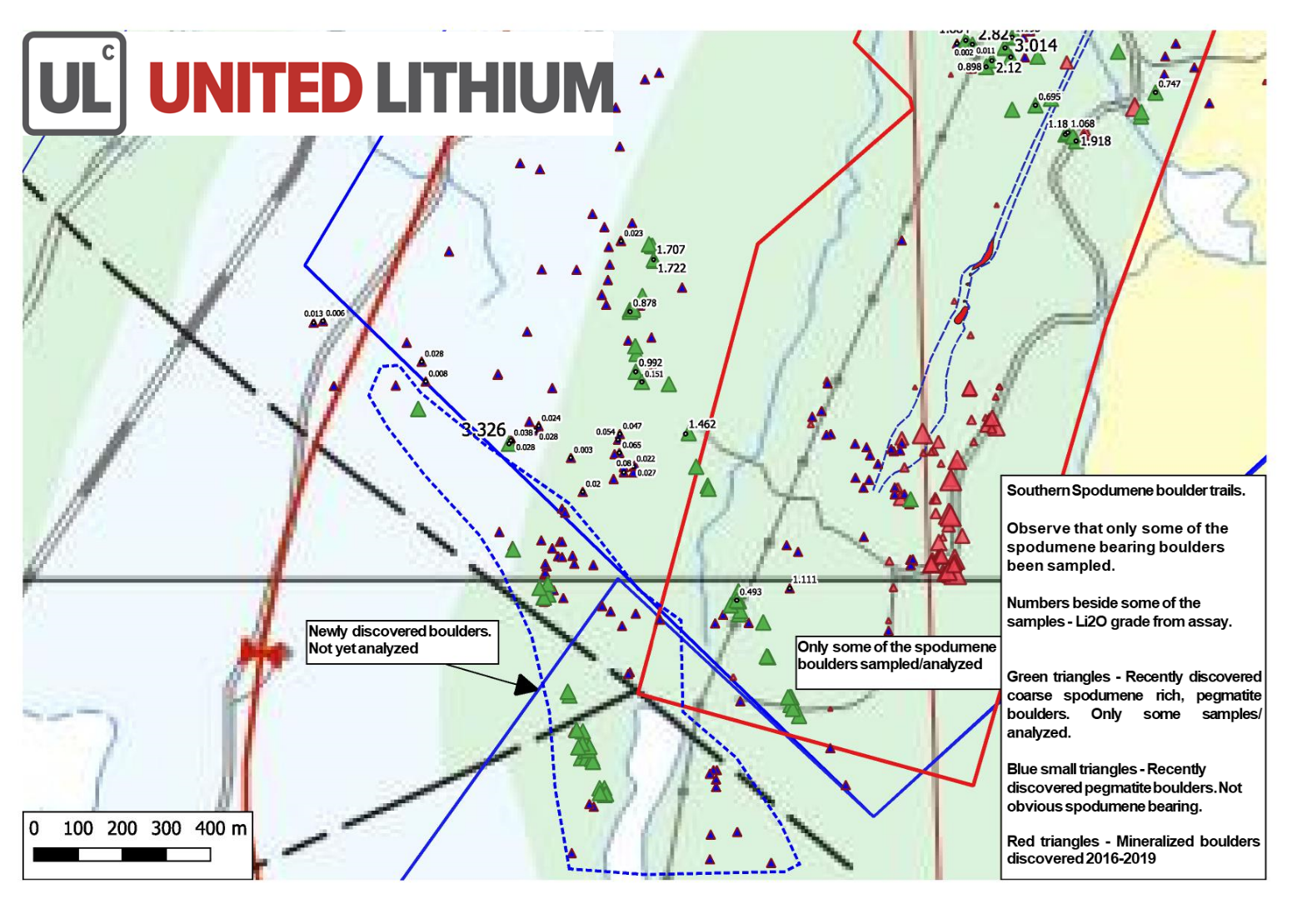 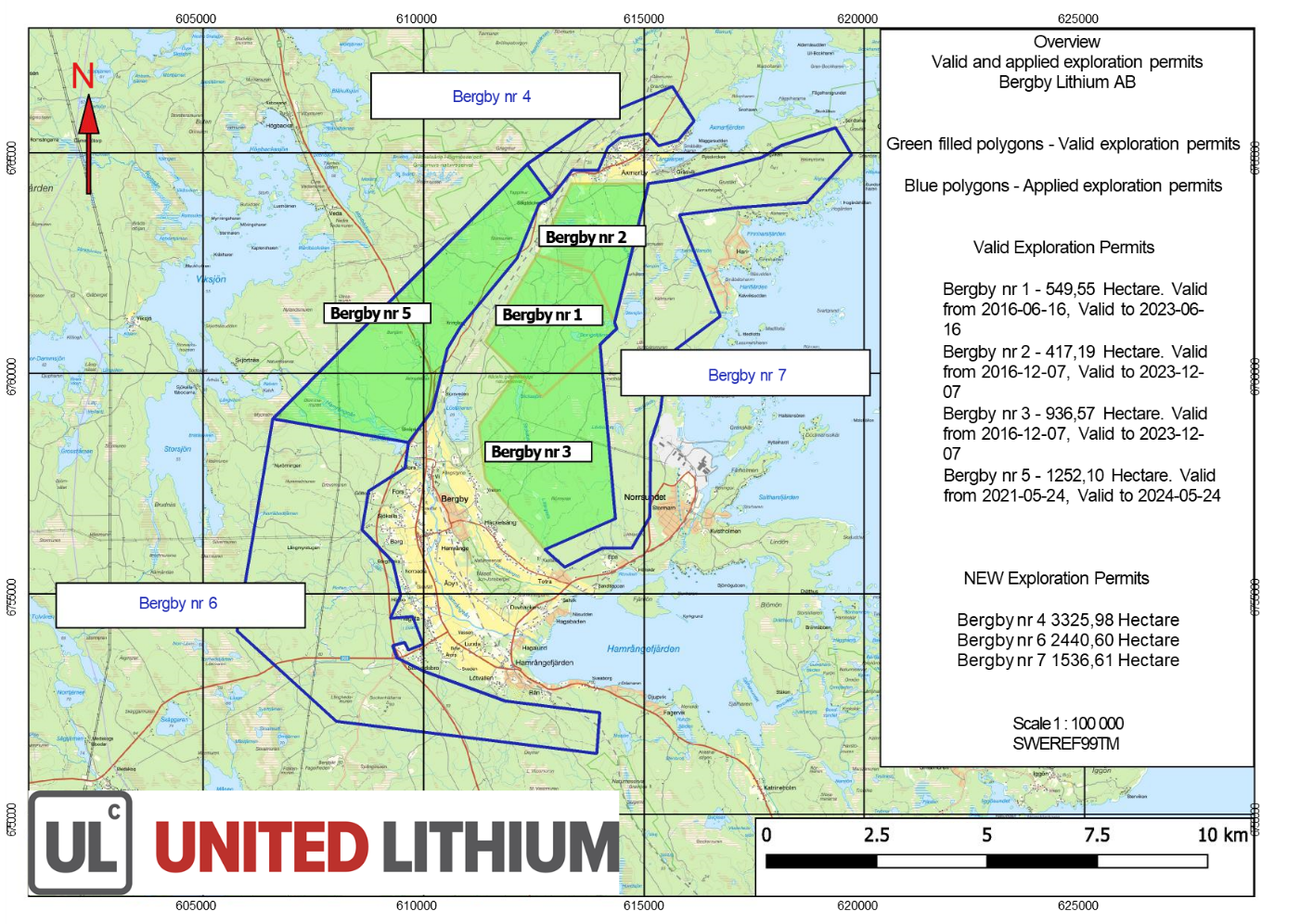 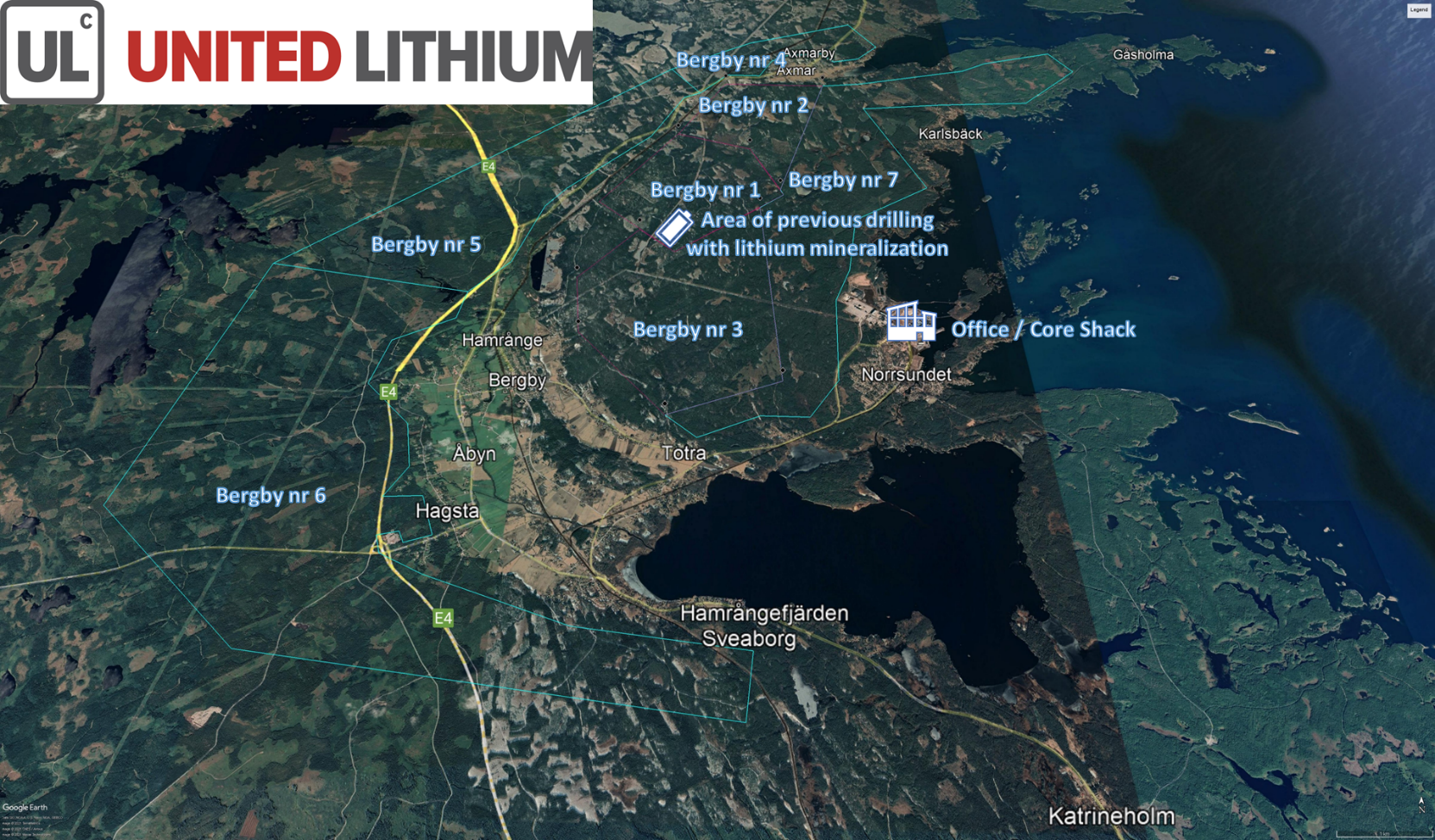 Samples submitted by United Lithium were analyzed by the ME-MS81 and Li-OG63 technique by ALS Limited laboratories in Pitea, Sweden and Loughrea, Ireland.

Mark Saxon (FAusMM), Technical Advisor to the Company, is a qualified person as defined by National Instrument 43-101 (Standards of Disclosure or Mineral Projects) and has prepared or reviewed the preparation of the scientific and technical information in this press release.