VANCOUVER, British Columbia, Sept. 28, 2022 (GLOBE NEWSWIRE) — United Lithium Corp. (CSE: ULTH; OTC: ULTHF; FWB: 0ULA) (“ULTH” or the “Company”) is pleased to announce that it has received communication from the US Bureau of Land Management (“BLM”) confirming the validity of 508 unpatented lode mining claims in the vicinity of Custer, South Dakota, covering an area of nearly 16 sq. miles (40 sq. km). This area is recognized for historical mining of Lithium-Cesium-Tantalum (“LCT”) pegmatites, particularly during and following World War II, and was the second largest producer of beryllium in the US at that time.

United Lithium recognized the past history of production in the Black Hills pegmatite province, evaluated the opportunity, and determined that a high probability remains for the discovery of extensions of previously mined high-grade lithium-bearing pegmatites and new discoveries. Currently there are several pegmatites in the region that are quarried privately to produce high quality feldspar, mica and quartz products.

When unpatented mining claims are staked in the US, especially in areas where land acquisition is competitive, the BLM reviews the timing, staking procedures and proper filing of claim notices to recognize the validity of the mining claims. This process was completed by the BLM for the blocks of claims illustrated in Figure 1. Areas within the outer boundary of claims that are shown not to be staked in Figure 1 are largely private property holdings which are unavailable for staking.

Contemporaneously with claim staking, 226 rock chip samples were collected from some of the outcropping pegmatite bodies across the claim block. The results of the sampling identified areas of high lithium (Li), beryllium (Be), tin (Sn) and caesium (Cs). Plotting of assay results for key elements suggests a zoning pattern in which three domains are emerging: a central Li-Be-Sn zone, flanked by a Be-Li Zone and a K-Cs+/- Li zone, with definite areas of overlap. Of interest, the historical Helen Beryl Mine (Figures 3, 4 and 5), the Tip Top Mine, Tin Mountain Mine and the Lithia Lode are highlighted, but new targets were also identified that require greater delineation and priority follow-up. The emerging pattern is present in Figure 2. 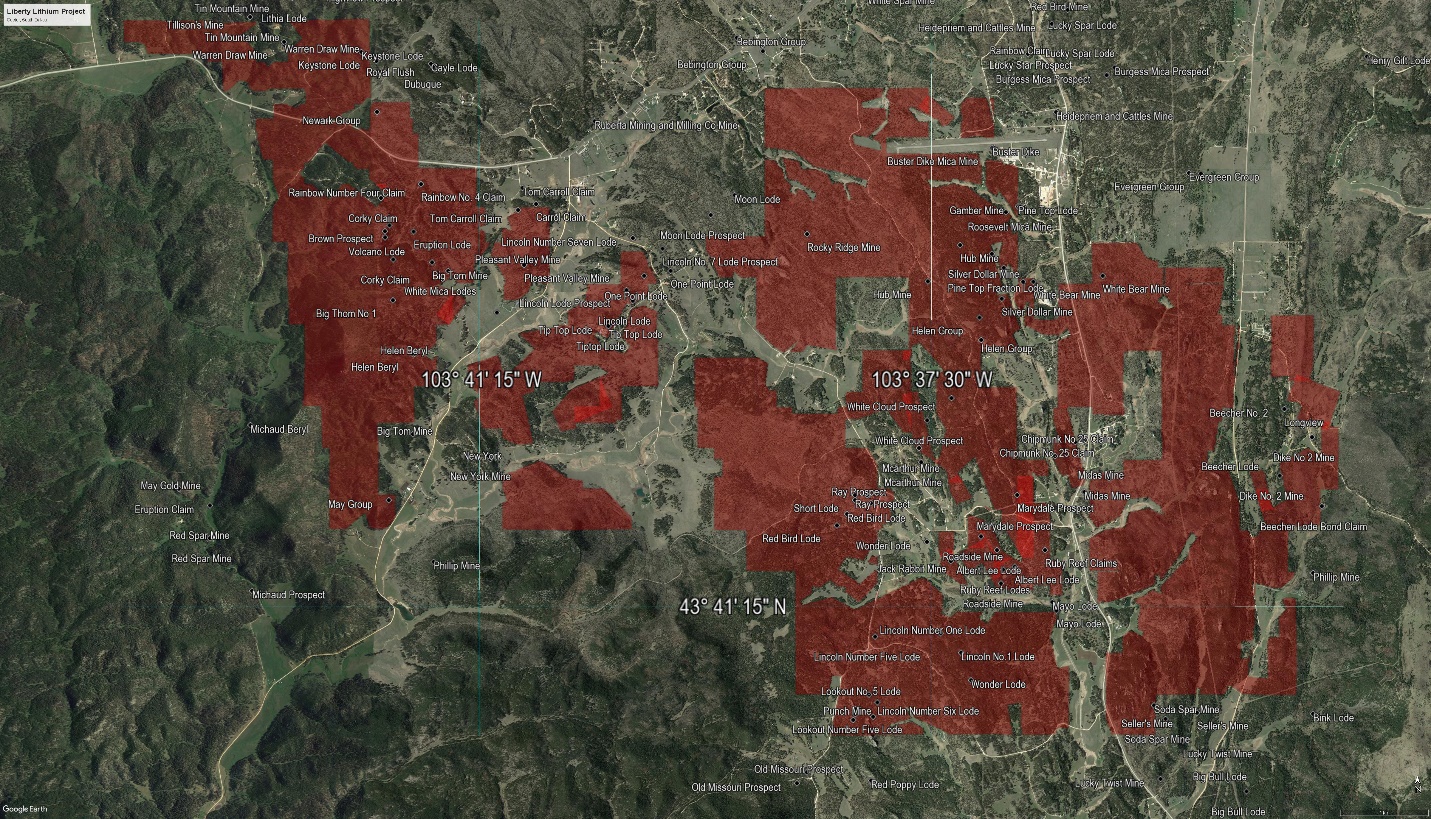 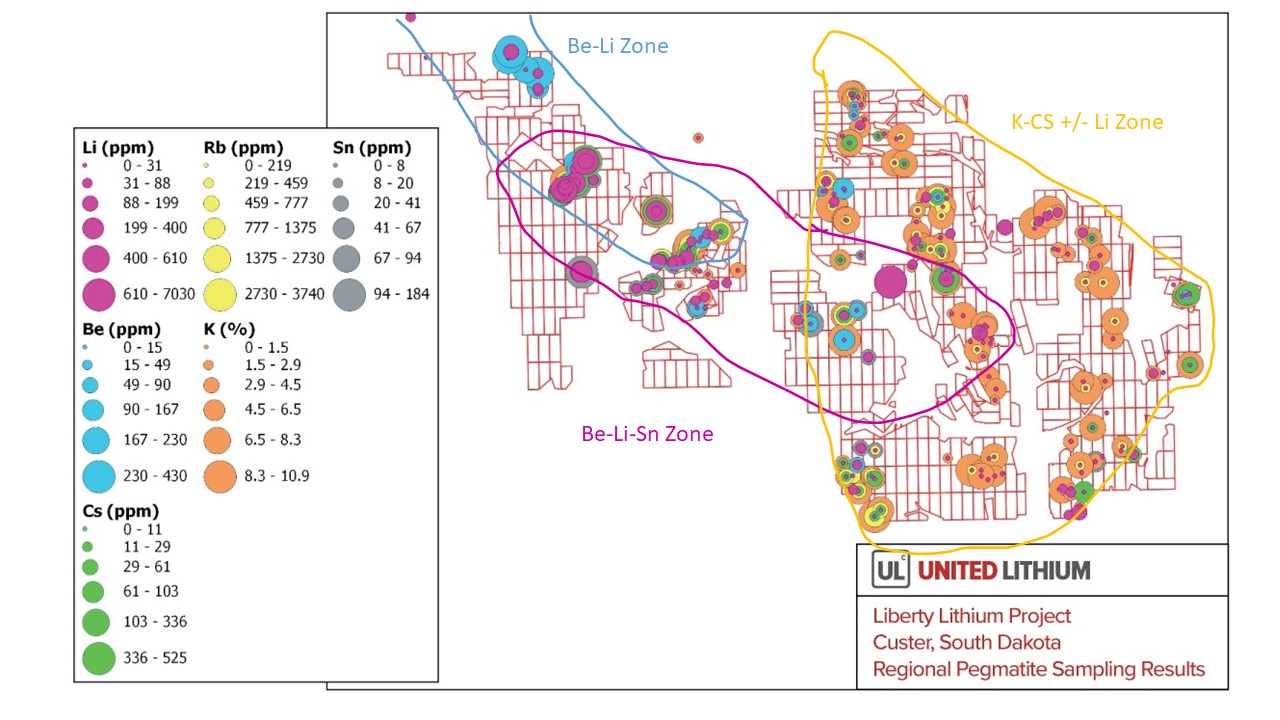 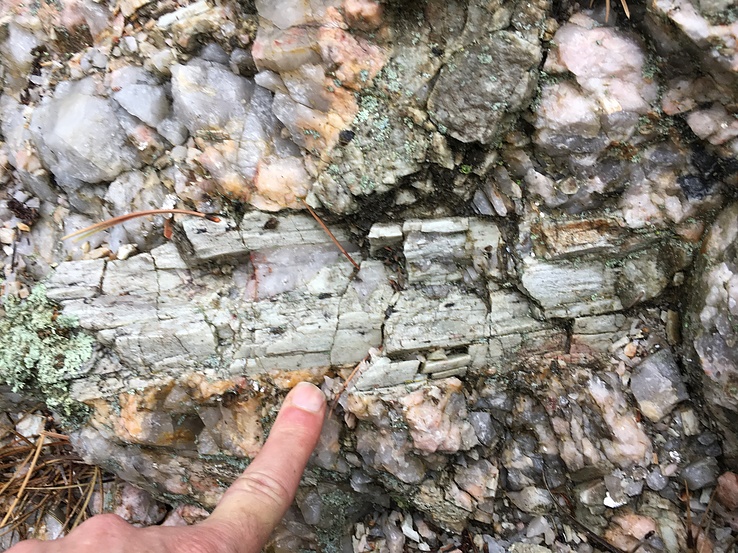 United Lithium is active on multiple high potential lithium projects in both Europe and North America, with a view to become a long-term sustainable supplier of lithium to the rapidly growing lithium-ion battery market.

Mark Saxon (FAusMM), Technical Advisor to the Company, is a qualified person as defined by National Instrument 43-101 (Standards of Disclosure or Mineral Projects) and has prepared or reviewed the scientific and technical information in this press release.

On Behalf of The Board of Directors
Michael Dehn
President, Chief Executive Officer and Director

United Lithium Corp. (CSE: ULTH) is an exploration & development company energized by the global demand for lithium. The Company is targeting lithium projects in politically safe jurisdictions with advanced infrastructure that allows for rapid and cost-effective exploration, development and production opportunities.

The Company’s consolidated financial statements and related management’s discussion and analysis are available on the Company’s website at https://unitedlithium.com/ or under its profile on SEDAR at www.sedar.com.

This news release includes forward-looking statements that are subject to risks and uncertainties. All statements within, other than statements of historical fact, are to be considered forward-looking. The Company provides forward-looking statements for the purpose of conveying information about current expectations and plans relating to the future and readers are cautioned that such statements may not be appropriate for other purposes. By its nature, this information is subject to inherent risks and uncertainties that may be general or specific and which give rise to the possibility that expectations, forecasts, predictions, projections or conclusions will not prove to be accurate, that assumptions may not be correct and that objectives, strategic goals and priorities will not be achieved. These risks and uncertainties include but are not limited those identified and reported in the Company’s public filings under the Company’s SEDAR profile at www.sedar.com. Although the Company has attempted to identify important factors that could cause actual actions, events or results to differ materially from those described in forward-looking information, there may be other factors that cause actions, events or results not to be as anticipated, estimated or intended. There can be no assurance that such information will prove to be accurate as actual results and future events could differ materially from those anticipated in such statements. The Company disclaims any intention or obligation to update or revise any forward-looking information, whether as a result of new information, future events or otherwise unless required by law.

The CSE does not accept responsibility for the adequacy or accuracy of this release.

Photos accompanying this announcement are available at
https://www.globenewswire.com/NewsRoom/AttachmentNg/a9001cab-c850-490b-9ac0-0e00095597a6