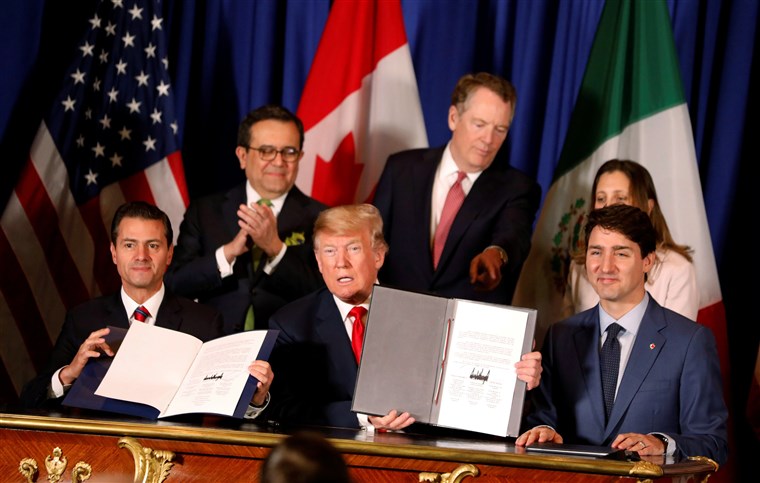 CBJ — Canada, the United States and Mexico have signed a new North American trade pact at the G20 summit in Buenos Aires, Argentina.

The USMCA will replace the old NAFTA agreement, which had stood for more than 20 years, although the new agreement still must pass through both the House and Senate in the U.S., and that in itself could result in some fireworks now that the Democrats hold majority power in the House.

However, U.S. President Donald Trump brushed aside difficulties he may have in getting the deal through U.S. Congress.

The leaders of the three countries agreed on a deal in principle to replace the North American Free Trade Agreement that governs more than $1 trillion of mutual trade after 18 months of acrimonious negotiations concluded with a late-night deal just an hour before a deadline on September 30.

Despite the smiles and happiness that a deal had been struck, Prime Minister Justin Trudeau still took the opportunity to fire a few verbal jabs at Trump. It seems he purposely continued to call the new agreement by its old name — NAFTA — and also poked at Trump over the contentious U.S. steel and aluminum tariffs and said General Motors decision to cut production and slash its North American workforce, including in Canada, was a “heavy blow.”

“Donald, it’s all the more reason why we need to keep working to remove the tariffs on steel and aluminum between our two countries,” said Trudeau. Trump didn’t have an immediate verbal response, but one on Twitter is almost all but assured.

This USMCA agreement ends Trump’s aggravation with North American trade and will now put full focus on his dismay with the massive trade imbalance with China. It’s recognized that there cannot be a 1:1 ratio in trade, but the U.S. government wants the gap narrowed significantly.