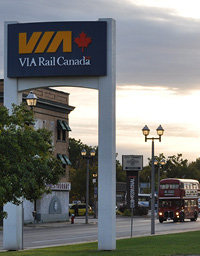 Aggressive Transformation is Essential for Survival

Long before the world was introduced to airplanes and automobiles the main method of human transportation was the train. Going back to the very early days of rail service, trains were often powered by steam propulsion.  In the modern era it’s been transfixed to diesel.  Urban centres use electric locomotives with overhead wires, not unlike what we see being used for streetcars in some larger metropolitan areas.

Trains have been and still are a highly efficient form of transporting freight due to the sheer volume of goods that can be carried at one time. But the competition for passenger services has been a much greater challenge and revenue has plummeted over the years.  For long trips, travelers can reach their destination infinitely faster by taking an airplane.  Personal automobiles provide the freedoms to travel at ones own pace, rather than be forced to a regimented schedule.  In many instances, high-speed rail travel is both time and cost-competitive with air travel when distances do not exceed 500 km.  This takes into account time spent at airport check-ins and boarding procedures, which can add up to two hours to the actual transit time for a commuter.

So what is the state of passenger rail service in Canada in 2012?  Mark Laliberte, president and CEO of VIA Rail addressed that very topic during a recent luncheon at the Toronto Board of Trade.

“I think we can all agree that passenger rail service has played an important role in the prosperity and economic welfare of Canada,” Laliberte says.

There’s no doubt that many Canadians want to see passenger trains continue to be an important aspect of the socio-economic development and the sustainable prosperity of Canada from coast to coast.  In order to accomplish that, Laliberte is candid in stating that his company must be adaptable and move with the times in order to meet the expectations of the Canadian segment of the public who use train service as a mode of transportation.

“VIA Rail will have to change,” Laliberte succinctly states. “It will need to transform itself by modernizing its operations and redefining its role in light of the new financial context faced by both private and public sectors.”

Passenger trains have played a vital role in Canada’s entire 145-year history and have helped to form its national identity, linking communities across great distances and rugged terrain.

VIA Rail’s network stretches more than 12,500 km, or about twice the length of Canada.  Last year more than 4.1 million passengers traveled 1.4 billion km on the service. That works out to nearly 500 trains per week servicing 450 Canadian communities.

Laliberte joined VIA Rail in January 2010 after 30 years in the railway business, mainly on the freight side. The first thing he realized about VIA’s passenger rail business was that it is not one homogeneous market but actually serves three markets: remote services, long distance services and what’s known as the Corridor – the most populated rail route between Windsor, Ont. and Quebec City.

The reason Laliberte is candid in saying VIA must transform itself can be directly attributed to the financial losses that each of those three markets sustained.  Remote services lost $45 million, due to the low population base and serving only 109,000 customers.  Long distance services lost $81 and despite serving 3.8 million passengers, the Corridor connection was in the red to the tune of $135 million. Despite generating revenue of $283 million, the combined services lost $261 million – and thus the immediate need for transformation in order to survive.

Laliberte readily admits that VIA Rail must reinvent itself in order to remain competitive in today’s transportation industry.

Stage 1 began in 2007 when the federal government invested almost $1 billion in the refurbishment of its locomotives and cars as well as the renewal of stations and platforms to make trains more accessible for passengers.

“In Canada today, no other mode of inter-city transport is more accessible and affordable for Canadians challenged by a physical disability,” Laliberte remarks.

More than $400 million in infrastructure upgrades have been earmarked for the densely populated Toronto-Ottawa-Montreal triangle. Upgrades have also been made at Toronto’s Union Station, including a new lounge for passengers.

On Sept. 14, Minister of Finance Jim Flaherty was on hand in Oshawa to help unveil VIA’s new overhead walkway and island platform at the passenger train station.

“Our Government is proud of investments like VIA’s new island platform at Oshawa Station and through  the busy Québec City to Windsor corridor that create jobs and improve passenger rail,” Flaherty said. “These upgrades to the busy Oshawa VIA Rail station will translate to more efficient, reliable service for passengers.”

VIA Rail’s new overhead walkway and platform, which began serving passengers in July 2012, are fully accessible and are similar to work being done at other VIA stations in Ontario. Track modifications are also being made for greater capacity and to improve speed allowing trains to bypass trains stopped at the station. Funding for this $16M project came from the federal government’s s nearly $1 billion investment in VIA Rail over the past five years.

Stage 2 of the transformation deals with frequency adjustments aimed at permitting stronger use of rolling stock and a more efficient deployment of operating funding. In a nutshell: some routes that are sparsely used by commuters will have the frequency of trips reduced while areas with increased ridership will have additional trains added to the schedule.  Laliberte expects these modifications will result in an annual savings of about $11 million.

“In the corridor, we have reduced frequencies where ridership was too low to justify our train service,” Laliberte reveals.

An intermodal solution is what Laliberte feels will be the key to an efficient VIA Rail service.

“We believe that the efficient use of the transportation system lies in the development of intermodal partnerships between all odes of transport: trains, motorcoaches, car-sharing companies and even airlines,” he continues.

Making the travel experiences both enjoyable and an efficient use of time is another aspect that will go a long way with travelers.  That includes being able to connect to VIA’s mobile Wi-Fi services for computer work and cellphone use is permitted on trips, which is often not the case when flying on an airplane and is also against the law when driving a vehicle – unless of course it’s a hand-held device.

Laliberte says the third and final stage addresses the core issue: the need for a new business model for VIA Rail.  It’s the need to modernize the system without unduly burdening Canadian taxpayers. Laliberte also openly admits that government funding is necessary for the existence of passenger rail service in Canada. But to be successful and survive, it will need to be very resourceful with that funding, because taxpayers will understand only to a certain point.

“The issue is not whether government should fund passenger service,” Laliberte declares.  “The issue is whether we can create a business plan that allows growth and modernization to be financed by different sources – not exclusively by government.”