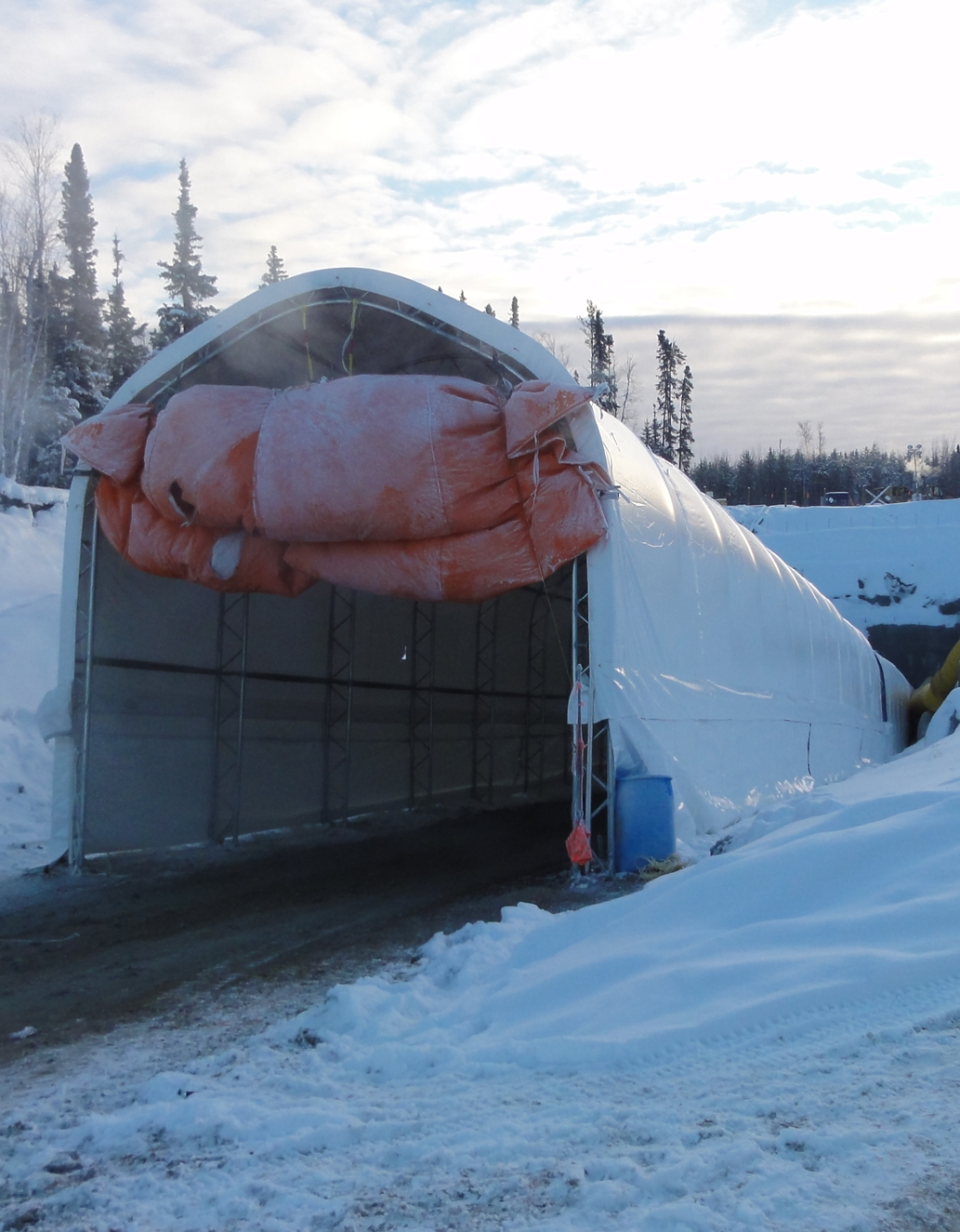 VMS Ventures’ copper mine in Snow Lake will be 100 per cent funded, constructed and operated by Canadian mining veterans HudBay Minerals, leaving the junior explorer free to seek out more opportunities.

A combination of technical savvy and luck led geologist John Roozendaal to discover the 2.55Mt 4.52 per cent copper deposit in Reed Lake, 50 kilometres from the mining town of Snow Lake in Manitoba, Canada. Although located in one of the world’s richest multi-metal mining locales, the deposit had been in hiding, waiting for the right time and the right people with the proper skills to come along. Roozendaal, who founded the company in 2000, and the team at VMS Ventures (TSX-V:VMS) got it right in their first drill program.

“We assembled a good team of people with geological knowledge of Manitoba, and identified the area around Flin Flon and Snow Lake as one of the world’s richest belts of VMS [Volcanogenic Massive Sulphide ore] base and precious metal deposits. The problem was that about half of the belt was covered by a thin layer of younger rock, meaning traditional prospecting over the last century had limited success,” he says.

“It’s only in recent years we’ve had access to a tool that allows us to look beneath this ‘cover’ rock for ore deposits not visible at surface. We applied today’s latest technology – using a helicopter system to look for metallic ore bodies – and identified one particular target that was only 100 metres off a main highway.

I happened to be the geologist fortunate enough to be guiding the drill program when we intersected the high-grade copper deposit at Reed Lake.”

“It was a combination of great logistics, great timing in using new technology and, frankly, good instincts in following up on our hunches that allowed us to make this discovery in our first drill program. So a little bit of good luck goes a long way towards success.”

VMS Ventures was able to raise a lot of money once studies indicated the deposit has fantastic grades. The stock traded two billion shares over two years, at a peak of CA$1.70 per share from a low of $0.12 per share just before the discovery of Reed Lake. The company raised $20 million from Toronto-based Griffiths McBurney and Partners (GMP), which strengthened its treasury and provided the company with credibility as a “mine-finder” in the industry.

The exercise of raising capital was largely driven by VMS Ventures chief executive Rick Mark, who joined the company in June 2002 to manage its public presence. Before Mark became a director in a number of public companies, he worked as a teacher and principal in the public school system and he credits this experience with preparing him to run a public company.

“Some people find it odd, but running a school, to me, is not all that different to running a public company,” he remarks. “They’re complex organizations that need leadership from within and you’ve got to find people who can work independently. They need to be committed to the task at hand and also have a dream about what they want to accomplish, and I think that’s largely what we are.”

Mark joined VMS Ventures at a time when resource stocks were floundering, but was nevertheless confident he was making the right decisions in a tough market. “I’d had enough public company experience to understand how they work and it was absolutely essential to have faith in the people in charge of the business,” he says. “I was confident that John and the guys he introduced me to were capable explorers and had a real understanding of what they were doing, so I jumped in as a partner.”

When it came to building the Reed Lake mine, VMS Ventures wanted an experienced partner. That came with a deal between VMS and HudBay Minerals, who has been mining in the Snow Lake region for 80 years. “We didn’t want to be the mine builders and operators because the deposit at that time (despite containing 3 million tonnes of high-grade copper worth more than $1 billion) was too small for a junior company to afford to set up a mining operation around it,” Mark explains.

“So the sensible thing, right from the beginning, was to have HudBay as the operating partner. While they pushed and shoved on the deal for a year, we were patient and had money in the bank; we weren’t going to do anything foolish with this asset.

“Eventually we constructed a deal where we own 30 per cent of the deposit and they provide all the financing to construct the mine,” Mark continues. “That is a remarkable opportunity for VMS, because, in other words, we’re putting no money out at all while HudBay builds the mine, leaving our treasury to be used for new acquisitions and exploring for mines on our 100 per cent owned properties. Once in production, the ore will be trucked to infrastructure in Flin Flon for processing.

“We’ll pay back our share of the expenses to HudBay out of our revenue, which we anticipate will take less than a year if copper prices hold at the current level. We anticipate cash flow starting in 2015.”

In a Good Place

VMS Ventures has secured a deal that relieves it of upfront costs but, in any case, Reed Lake is a low-CAPEX project. As mentioned previously, it lies just 100m from a main highway so the transportation of ore to Flin Flon for processing will be straightforward. Because the deposit occurs just 25 metres below the surface, VMS will not have to incur the cost of building a mill or a shaft, access will be by decline and processing will occur at HudBay’s existing facilities.

“They have a crusher, a mill and a concentrator and they’ll export the metal, marketing it under their current marketing division,” says Mark. “So we get all that as part of the deal, as well as mine financing and the benefit of their tremendous history and experience. Having HudBay as a partner was absolutely strategic to this mine being profitable… We get the best of both worlds.”

Because the mine is expected to have a relatively short life of six years, it will be powered by a transportable diesel generator plant; removing the need for costly power infrastructure. Its sustainability credentials aren’t bad either.

“What’s amazing about the mine is that we’ll leave almost no footprint when we’re done,” says Roozendaal. “It covers only a seven hectare area and when the mining is completed, all the rock taken out of the ground will be either at Flin Flon or buried deep in the ground. The surface area will be restored to its original state.”

The Reed Lake Project is on budget and on schedule to start production by the end of 2013. VMS Ventures is in a similarly good position itself. “We’re well funded, have about $10 million in the bank and we know cash flow is coming,” says Mark. “I think every exploration company wants to get where we are; but almost none of them make it.”

With arrangements in place for Reed Lake, VMS Ventures is continuing to explore. It has 16 additional targets to drill within its large Flin Flon/Snow Lake land package – any one of which could be its next mine, adds Roozendaal – and VMS plans to draw upon its solid financial base to acquire new mines further afield.

“Because we have cash flow in the not too distant future, we are starting to look for what will be our next mine through acquisition,” explains Mark. “The mining market has become tougher on companies, but that gives us a great opportunity to make some good acquisitions.

“So many companies are running out of money; so many juniors are trading below 10 cents and have assets they can’t finance. We are currently reviewing  advanced projects, where an investment of millions in drilling and other studies could result in a project being valued at many times that amount – similar to Reed – and ultimately be developed into an operating mine.”

It is not VMS Ventures’ aim to become a standalone producer. Mark says he thinks the “smartest approach” is for the company to stick with what it does best and get the most it can from its exploration and project evaluation and development expertise.  In the coming years, it aspires to make new discoveries and/or acquisitions in safe mining jurisdictions and see them developed them into mines. Through North American Nickel, of which it owns 26 per cent, VMS Ventures wants to explore and advance the Maniitsoq project in Greenland. Maniitsoq hosts a belt of prospective nickel host rocks that Mark reckons could become “the talk of the mining world”.

All this considered, VMS Ventures wants to make it clear to investors that Reed Lake is now a “mature story” with production expected by the end of the year and feels it can achieve considerable growth even in poor market conditions due to its future cash flow.

“Mine stocks tend to move as they get closer to production; there’s a long dead space where the project goes from discovery, to feasibility studies, to production,” says Mark. “Stocks generally rise as a production decision is made and we’re hoping that will be the case with VMS Ventures this year.”

It surely will, providing the management and technical team conducts business as usual and of course, receives its share of luck.