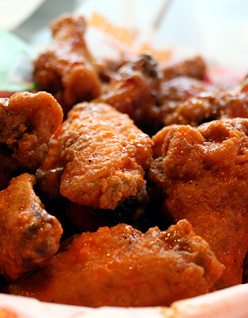 Wacky Wings restaurants, the creation of Damon Burgess, President and Owner, and a native of Sault Ste. Marie, Ont., opened the original of four Wacky Wings locations in his hometown in 2007.

The established proved to be so successful that, within only a few years, a second location started up nearby the original. Today, there are additional locations in Sudbury and the newest expansion into Mississauga, with Burgess owning all four locations.

Its chicken menu and more than 100 flavours remains the mainstay at Wacky Wings, while the eatery also offers a variety of other tasty choices, including its intriguing salad selection, which offers more than 70 different toppings. In an evolving industry, Wacky Wings has placed an emphasis on healthy eating.

“A big part of what makes us stand out from the typical chicken wing restaurant is that we offer more than just chicken wings,” Burgess said, noting some of Wacky Wings’ other menu selections, including wraps, burgers, sandwiches, pizza, and more.

And while Wacky Wings perfected its place in the northern market, the company has also recently expanded into the Greater Toronto Area, opening its fourth restaurant in Mississauga. Unique to Wacky Wings, and one of the many elements that separates the restaurants from others in its industry, is its offering of in-restaurant interactive games, enjoyed by children and all ages alike.

“Our vision at Wacky Wings was to build the perfect relaxed atmosphere where you could enjoy a meal in a fun environment,” reads the company website.

“We covered all our walls in cedar logs, designed all our custom wooden tables, chairs and bar top and accented the room with full character logs. We use mostly northern white cedar to achieve this beautiful cozy northern Ontario look.”

Aside from its delightful chicken wings, also unique to Wacky Wings s the unique interior design, fit to encapsulate the outdoor beauty of northern Ontario. The interior, including the walls, tables, chairs, and more, all hold a distinctive wooden appeal. Away from the tables, guests remain entertained with the in-restaurant interactive games, multitude of television screens featuring the latest sporting events, and fun billiard tables.

With its Mississauga location, Wacky Wings has partnered with the locally-based Playdium, the entertainment giant specializing in interactive games and entertainment. According to Burgess, Playdium had significant interest in partnering with the Wacky Wings concept and, today, these two exciting companies have formed an excellent tie. In fact, it was representatives from Playdium that sourced the site for the new Mississauga location.

“We are definitely planning an aggressive expansion now that we have the four store openings,” Burgess said.  “The last three restaurants have all been in the works over the last year and we’re looking at a couple of other sites right now.”

Burgess feels that there is still room for further expansion in the northern Ontario market, as well as a variety of viable markets in the Greater Toronto Area that remain untapped by Wacky Wings, something in which the company will continue to investigate, focusing on future expansion. Over the coming years, Wacky Wings plans to continue to build its foot hold in the Ontario market.

Wacky Wings has successfully veered from the stereotypical dining experience, in offering its customers not only a delicious dining variety, but also its assortment of fun and interactive games. These are only some of the many aspects of how Wacky Wings is different from your average restaurant.

Among its many intriguing competitive advantages in the tasty chicken wing market, Burgess believes that primary among these, Wacky Wings separates from the competition with its innovation, adding, “We’re innovative in all aspects of what we do in the restaurant industry and, between us and the Playdium side, there is a lot of years of business ownership.”

Also unique to Wacky Wings is its Sub-Zero pour system, offering industry favourites like Molson Canadian and Coors Light, available at all its location. The draught is served chilled at minus two Celsius, and, as Burgess aptly put, nothing is better than cold beer, chicken wings, and great sporting action.

Wacky Wings has formulated a successful combination of its great food and the interactive fun of Playdium entertainment to form a thoroughly enjoyable and entertaining dining experience. Designed to appeal all suitors, Wacky Wings is a family restaurant, with a large emphasis on its sports bar.

“Wacky Wings makes going out and dining fun, as opposed to just a necessity of life,” Burgess summarized. “That is really our focus and our concept…to make it a fun night out.”