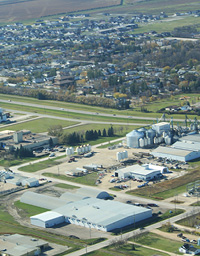 The City of Winkler and the Rural Municipality of Stanley have numerous joint interests including a common workforce, shared services and most importantly, a mutual desire to see the region successful. As a result, the Winkler/Stanley Economic Development (WSED) office was formed in January 2010 as a partnership that promotes, develops and supports local investment and growth. “The municipalities are so intertwined that it only makes sense for them to combine their efforts,” says Economic Development Officer, Darlis Collinge.

Having one cohesive office dedicated to attracting industry and working with business has been a successful move for both municipalities. “We aren’t competing over new developments,” explains Collinge. “Rather, we focus our efforts on meeting the specific needs of companies and help settle them in the RM or the City, whichever is the best choice for the company.’”

WSED’s priority is industry attraction, particularly in the realm of manufacturing—the most prominent economic segment outside of agriculture.  Manufacturers with anywhere from two to 200-plusemployees operate in the area, producing a wide assortment of products including canvas goods, windows and doors, cabinets, cardboard boxes, trailers, grain bins, modular homes, recreational vehicles, aeration systems, and plastics—just to name a few. Two new products, vertical wind turbines and packing equipment, will be manufactured this year, and other industries are in discussions with WSED.

As the urban hub of south-central Manitoba, the area also focuses on business development and chain store attraction in order to provide residents and visitors with a good selection of products and services. Business expansions and start-ups occur regularly, with numerous in the past few months. In addition, several entrepreneurs are planning for a spring or summer openings. Economic development is certainly going strong in Winkler/Stanley and companies who want to be part of a vibrant, growing area are invited to come check out the opportunities.

Located in the Red River Valley, the area has incredibly rich, dark soil. Agriculture is a predominant industry in this fertile region, which produces the largest variety of crops in western Canada.  Potatoes, corn, onions and cereal crops, along with specialty crops like soybeans, sunflowers and beans are produced, marketed and in some cases, processed as well. Companies also complete significant R&D, continually seeking ways to improve production and quality.
The innovative spirit shown in the agricultural sector thrives in other areas of the economy as well.  There is a confident entrepreneurial attitude here that Collinge credits as being the reason companies grow and flourish. The community continually invests in itself and businesses support each other by purchasing local products and services, and working together cooperatively. With the ‘can-do’ approach that is evident throughout the City and RM, it’s common for those considering doing business in Winkler/Stanley to meet with the Mayor or Reeve on an initial visit. Collinge states this is because “we want you to get to know people here, and we want to know you. Ultimately, we are interested in seeing you succeed.”

Growth is ongoing in Winkler/Stanley, in part because it takes charge of its own future. The City has recently opened another industrial park, while the RM hosts the corridor, a section of highway immediately west of Winkler that is home to a growing number of commercial enterprises. The City’s Economic Development Incentive Program shows appreciation for companies making large investments in the community. However, the real incentive to doing business here is the strong work ethic of the labour market, excellent access to markets, and a strong culture of innovation, sharing and integrity.

Winkler/Stanley is an area of constant progression. It not only has one of the youngest populations in Canada, but is one of the fastest growing in the nation. Yet the area has maintained a strong sense of family and community, characteristics that contribute to a peaceful, engaging and rewarding quality of life.

In 1997 the Manitoba government needed a community to pilot its new Provincial Nominee Program. Winkler/Stanley gladly volunteered and 50 families successfully immigrated to the area. Since then, more than 8,000 people have arrived in the larger region from more than 80 countries. “Every culture has added to the area by bringing new processes, perspectives, technologies and talents to the local labour force,” says Collinge.

WSED recently developed the South-Central Manitoba Entrepreneurial Immigration Initiative to attract entrepreneurial-minded newcomers who do not have family or friends in Manitoba, and are seeking community qualities found in Winkler/Stanley. Approved by the Province as a strategic initiative, WSED works closely with Manitoba Labour & Immigration to provide non-financial support to 100-150 families a year with moving to the area.

The people in Winkler/Stanley are resourceful and committed. They help their neighbours and support social causes. They are multi-skilled and work hard. They care about their community and each other—and it shows.

Winkler/Stanley continues to enjoy prosperity and growth in all areas from economic development to infrastructure to recreation and education.  Businesses continue to invest in the region, sold on the strength of the community and the overall “can-do” attitude.

As Collinge aptly puts it, “We market ourselves by being true to who we are.”