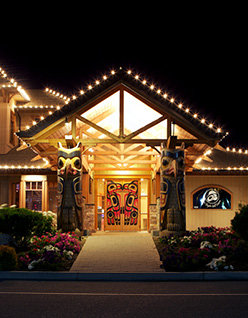 Westbank First Nation (WFN) represents the best of the aboriginal peoples. Working together and led by Chief Robert Louie and WFN Council, WFN grows the economy of the Westbank reserve, providing a stable economic climate that attracts business and investment.

Among all other First Nations, WFN marks the largest development currently underway on its lands. Situated across the Okanagan Lake from the City of Kelowna, WFN comprises of five reserves totalling 5,306 acres. Dating as far back as 8,000 years the Okanagan people represent one of the First Nations and Native American people whose traditional territory spans across the Canada/U.S. border in British Columbia and Washington State. The Okanagan Nation consists of seven member bands under Okanagan Nation Alliance in Canada, and as Confederated Tribes of Colville in Washington.

In 1963, WFN separated from the original Okanagan Indian Band, which occupies the northern part of the Okanagan Lake. Originally known as the Westbank Indian Band, the band changed its formal name to Westbank First Nation. Chief Robert Louie told The Canadian Business Journal, “We didn’t want to be recognized under the term ‘Indian’ of the Indian Act of 1951. We choose to be recognized as a ‘first nation’ — the first peoples of these lands. Community, Leadership, and Pride represent our core values, and we highly praise these values. We have a strong entrepreneurial spirit in our community, and we are a very business oriented group overall. Our members understand the need to work and profit, and this spirit has led our drive to develop. We are also fortunate that we are located in one of the fastest growing regions in Canada, as Kelowna area usually ranks in Top 10 in regards to growth. We are currently showing about 20 per cent annual growth, and this is an extremely strong growth for a reserve — what we compare to a municipality.”

WFN structured its laws to accommodate development, and not to frustrate those interested in doing business on WFN land. “As a self-governing nation, we have opportunity to affect the business development, and this has been the major driver behind the rapid economic development of the reserve. As a self-governing nation we have the powers similar to municipal, provincial, and federal governments. Our developers and business partners tell us that we ‘move at the speed of business’, while in the past – when WFN still fell under the Indian Act – any development faced many obstacles and red tape. As a self-governing nation we cut through the red tape and provide an effective and efficient system that gives confidence and security to the developers and residents.”

To better serve business, WFN also launched its own Economic Development Commission (EDC), the first First Nation EDC in Canada. Dolores Ellingboe, the Chair of WFN’s Economic Development Commission, said, “Our main focus is business attraction, retention, and facilitation. We feel that it’s important to engage and create positive working relationships and alliances with other local economic development commissions. Over the past few years we have focused on development of our Community Economic Development Strategic Plan. We engage closely with our members and community, and seeking their input on development. We are working to build an environment where Okanagan youth can work and build businesses, and to boost the nation’s confidence.”

The Four Food Chiefs (symbolically representing traditional food sources as well as spiritual aspects of the Syilx culture), incorporate Okanagan culture and history and guide WFN’s strategic planning, embracing entrepreneurial spirit without losing sight of Okanagan history and culture. The Four Food Chiefs manage different areas of the WFN development: Chief Black Bear (Governance), Chief Spring Salmon (Economy), Chief Bitterroot (Lands Management), and Chief Saskatoon Berry (Community). “To work as a community, we keep our band members well informed, knowledgeable, and educated, so they can have the confidence that we will do things in a manner that supports their opportunities going forward.”

Due to its strategic location along the Highway 97 – the main route connecting the region with the rest of the province – WFN focuses on development of commercial real estate, including several shopping centres such as Snyatan Shopping Centre, Governor’s Landing, Governor’s Market, and the latest Okanagan Lake Shopping Centre. Jayne Fosbery, Economic Development Manager, said, “We are currently focusing on the commercial development, due to our strategic location. It’s only natural to do so. We have 1.3 million square feet of retail real estate assessed value of about $1.2 billion. We have over 400 registered businesses, which range from national chains such as Home Depot and Wal-Mart to small local store owners. We are developing our reserve to create opportunities for our youth. We want our youth to become well educated, but we also want them to return and utilize the opportunities offered within the WFN.

Going forward, we will continue to focus on commercial and retail development, as well as tourism and institutional development including health facilities and post-secondary education.”

Chief Louie added, “Besides commercial development, we also have traditional lands that are within the Okanagan Nation. These lands are a strong component of the Okanagan forestry industry. We currently manage some 150,000 acres of land within our traditional territories and we operate our own logging company. The forestry had been very successful and profitable for us even during the economic downturn. We are currently producing around 100,000 cubic metres of timber annually, while we manage the wildlife and water sources, maintaining sustainable ways of production.” Besides timber, WFN’s lands also offer some 14 million cubic metres of construction gravel, and WFN intends to start extracting this resource in the future.

WFN also recognizes the importance of tourism in the region as a significant part of the economy. WFN promotes tourism ventures on the reserve through encouraging private investments such as 19 Greens, Two Eagles Golf Course, and Family Go-Karts. WFN also created a development partnership with the Treegroup nearby Peachland, redeveloping Ponderosa Golf and Resort. The luxury resort project connects golf, fine wine, and mild local climate into one of the top North American golf destination (the golf course designed by a globally renowned course designer, Greg Norman Golf Design). The project expects to bring about $1 billion investment within 20 years, placing Peachland, WFN, British Columbia, and Canada on the map as a go-to golf destination.

As WFN becomes one of the most successful First Nations, it uses its economic success to support and revitalize its culture. WFN invests in the revitalization of the Okanagan (nsyilxcen) language within the community, reintroducing the language back into elementary school education, as well as in Westbank Child Development Centre. Chief Louie said, “As we have built our economic strength, we have put these monies to a good use, working to revitalize our culture and our nation’s pride. We worked for our members to recognize our language, our culture and who we are as a people. Some would think that development would work against the tradition and the culture, but we worked to do just the opposite — revitalize the culture, the language, and the community. As a result, we see the resurgence of interest in our traditional arts and traditions. With this cultural resurgence, and with integration of cultural elements into education, I predict that within two generations our educational results will exceed the average set in British Columbia.”

Westbank has attracted investment to its lands since its self-government agreement of 2005. The current investments on the reserve in 2010 generated annual tax revenues of $80 million, $50 million of which goes to the federal government, and over the past decade WFN’s GDP has grown from some $100 million to $458 million. Since 2005, WFN created 3,300 working opportunities, issued over $300 million in building permits, and attracted $245 million in construction investment. WFN has become a recognized entity in the Okanagan Valley, and works with governments and partners to sustain profitable, sustainable, and culturally appropriate development within and beyond its borders.