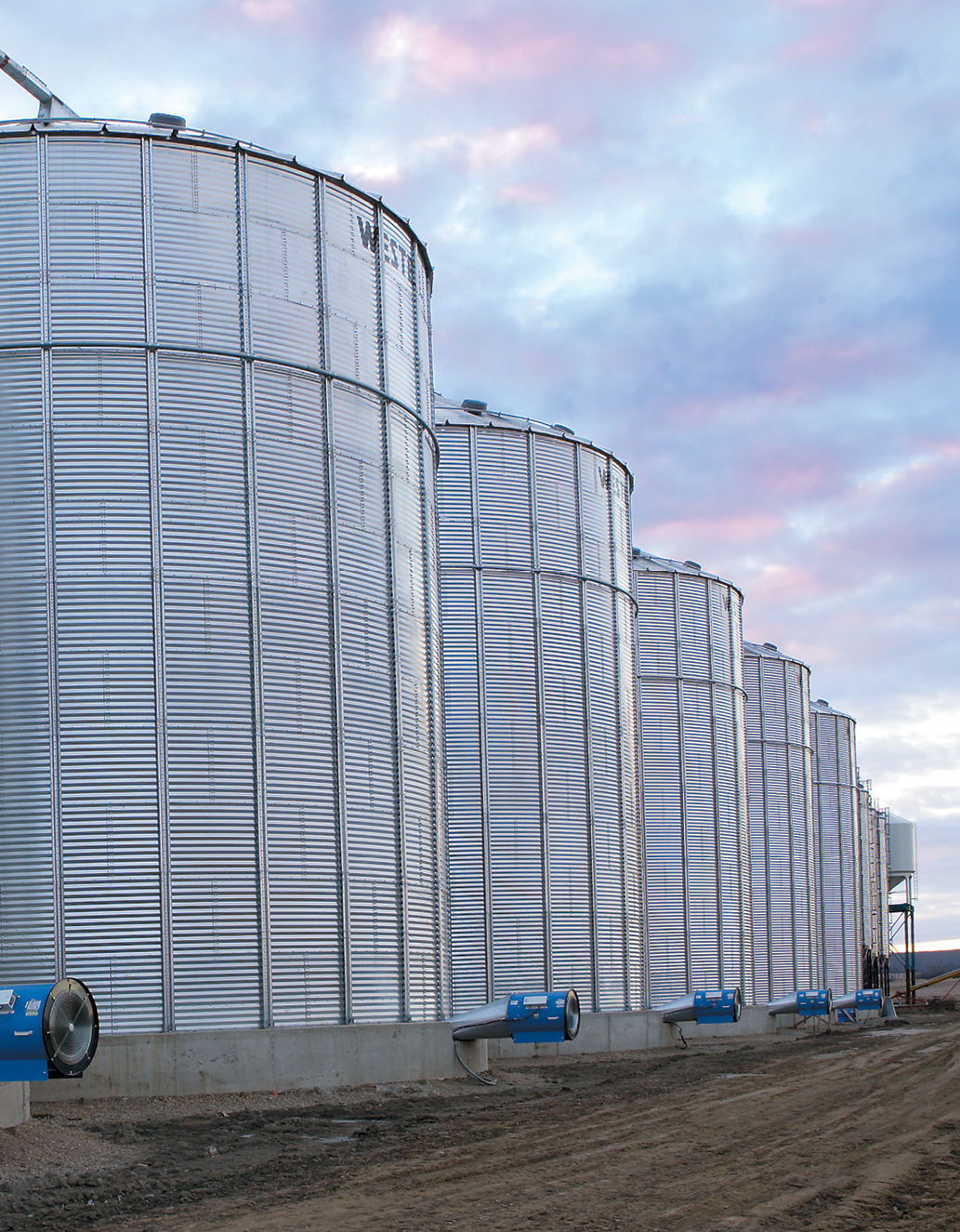 Westeel has been one of Canada’s leading manufacturers of steel storage products for over 100 years. A division of Vicwest Corporation (TSX: VIC and VIC.DB), Westeel’s iconic grain storage bins have dotted the Canadian prairies since the early 1900’s. The company is gaining momentum in the international market with plans to increase its global sales in the next few years, and is working to expand its presence in the North American liquid storage market.

Westeel’s farm and commercial agricultural storage products include grain bins, hopper tanks, and smoothwall hopper bins for the storage of grain, seed, feed, and fertilizer. The company also manufactures liquid storage tanks for the oil and gas industry, as well as customer engineered and fabricated products for specialized needs, such as water storage.

Maintaining its head office in Winnipeg, Westeel also has numerous manufacturing facilities in Saskatchewan and Alberta. The company employs over 500 people at these locations, producing 6,000 to 7,000 grain bins and up to 1,000 liquid storage units annually.

With a longstanding commitment to quality and a reputation for innovative engineering, Westeel became one of the first ISO 9001 certified companies in North America.

In 2011, Westeel opened office in Madrid, Spain, providing sales, marketing, and application engineering support functions. The office acts as the gateway to Westeel’s operations in Europe. Recently, the company re-established its presence in the U.S. with the opening of a branch office in North Dakota.

Vision for the Future

The Canadian Business Journal spoke with André Granger, President and General Manager of Westeel, about the storage industry, the current challenges in technology evolution, as well as the company’s global expansion plan.

“Storage as an industry segment has been a key part of the agricultural and energy industries for a very long time and is a mature industry in North America.

Storage is an integral component in the entire agricultural food and feed production process. Canada is also one of the largest oil and gas producers in the world, and we are very proud to provide storage products for both the upstream market (pre-transformation oil storage) and the downstream market (post-transformation containment of diesel and gasoline),” says Granger.

“Through partnerships with other technological companies, we continue to add products to our portfolio to create fully integrated systems. The average North American farm spans between 2,500 to 3,000 acres, so we want to provide full systems that include grain storage and handling, as well as fertilizer and fuel containment, all supported by electronic monitoring systems. We provide the ‘total farm’ concept to our clients.”

Part of the evolution within the storage industry has been the increasing demand for water containment and rain water collection for industrial and agricultural uses, and overall protection of water as a resource. Westeel entered this segment in 2009, selling secondary water containment to the oil and gas industry.

With the overwhelming spike in natural gas extraction, Granger says this will be one of Westeel’s expanding segments moving forward.

In the case of Westeel’s international expansion, “opportunity” and “challenge” are synonymous in nature. While international expansion offers Westeel a great opportunity, the company works on learning and understanding the markets, regulations, and social norms of each potential country. Illustrating the need to be well-aware of global geo-political changes, Granger commented, “The Middle East has been a great market for our products in the past. However, the current political and social changes in the region have led to widespread instability, which has caused a slowdown in that market.”

Global expansion for Westeel has continued to increase with the focus in regions such as Africa, the Middle East, Eastern Europe, and Asia, and Granger feels that Westeel will continue to fulfill the increased need in these areas. “Due to the lack of proper storage, there is a significant amount of wasted crops in these regions. So the challenge is to continue to educate the market and show them the value of using quality Westeel storage to add to their bottom line.”

In less than 35 years, the global population is expected to reach 9 billion. Naturally, an increased population will put a strain on food resources, including the need to provide more feed to livestock. As a result, the protection of food sources will continue to be a major concern for producers around the world. Reducing the amount of wasted grain through proper storage and handling, Granger says, will help producers feed the growing demand, “If we look at demographics for certain countries, 10 to 20 per cent of the grain produced on the fields is usually wasted due to pests, humidity and fungi during storage. Were the grain stored properly, the waste would be less extensive. It is possible to significantly increase the useable volume of crops via proper storage and management.”

Back in North America, Westeel’s agricultural storage products take up 60 percent of the company’s portfolio, with liquid storage taking on the rest. However, even with the continued development of the Alberta oil sands and the growing popularity of fracturing for natural gas reserves, Westeel does not expect this 60 to 40 ratio to change. “Yes, we expect the oil sands to increase this segment for us, but in the meantime, we have spent significant time and energy on developing our grain storage market internationally. Due to this global initiative, we expect this segment to continue to grow for Westeel along with the North American oil and gas segment. Our company is well positioned to supply the demand that both of these segments require, and we are confident that Westeel will rise to the challenge of meeting these demands.”