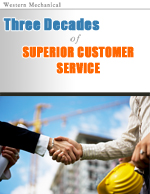 Western Mechanical is a leading industrial contracting company, based in Barrie, Ontario.

Since Western started 30 years ago, the company’s focus has remained – to deliver industrial contracting services to their customers that exceed expectations. Customers of Western can trust the company to deliver on promises, even through the worst economic times. Their motto: “Consistent delivery of high quality service by a skilled and empowered staff of professionals for a fair and competitive price”. Larry Eisses, company partner and Treasurer of Western, believes firmly and wholeheartedly in the company motto, as evident through his management team’s sound leadership and vision for Western.

In business for thirty years
Eisses and his partner, Peter Duivenvoorden, first worked at a local Barrie machine shop. The non-unionized shop was situated in a market of unionized industrial plants in Barrie, at a time in the late ‘70s when the city was booming. “All of the local plants would come to Barrie Welding & Machine (our shop) to have welding and machining services done, but we weren’t able to install parts because of our non-union status,” Eisses recalls. After some time, the owners of Barrie Welding & Machine approached Eisses and Duivenvoorden about starting their own company, knowing the gentlemen were aggressive and had a vision to do more. The company that grew out of the arrangement was Western Mechanical as it is today.

When the company started, Western had few competitors. Western came onto the market with good connections and the ability to provide services no one else could. A few years later, Western began to be known as a ‘specialized’ industrial contractor and the competitive landscape for Western got much smaller—customers started bringing the new business all kinds of opportunities, favouring the company’s dedication to service.

The value of a strong team
“We’ve never looked back,” Eisses says, “we’ve grown every year for the last 30 years and it’s amazing that we started with two, and now have over 130 employees, and because of our union tradesmen, sometimes up to 250 employees”. The company prides itself on being very hands-on and values internal employee promotion to hiring from the outside.

Western does something that is very unique with its employees. As a very organic company, Western’s management encourages their employees in each division to come to them with new ideas or business plans. “We very much allow the individuals here to come up with new business angles and ventures – the sky’s the limit,” Eisses beams. This innovative approach has helped Western become the diversified company that it is. The company has seven divisions: mechanical, civil, electrical, millwright, hydraulics, heavy lift and transportation. Lately, the company has seen lots of business in infrastructure work, including railways, bridges, and also automotive work. “A lot of the Canadian auto plants want service on both side of the border, so we’re trying to expand that way. We’ve even done work in Mexico, and our U.S. office is doing very well,” Eisses says. The Oklahoma office was another employee-triggered development for Western. The employee saw a market in the States, and the company supported the venture.

Business is holding
Eisses says that the business is going strong despite a shrivelled economy. Western employs personnel that approach every project with professionalism and dedication; they understand how the business works, and what needs to be done to keep things going. It is clear that Western is still striving to become greater and the staff explores vigorously in search for better answers. “They have often pulled together to be more efficient. Our staff searches for the best answers, works hard to be successful and often understates their superb work and effort.”

Luckily, Western is on the move with big projects like the new hospital in North Bay and the city’s military base. “We’re doing projects both nationally and internationally. We just have to be aggressive, because in an environment like this you don’t want to have all your eggs in one basket,” Eisses explains. For now, the most difficult jurisdiction Western has been working in is Quebec—strangely enough, considering they’re our closest neighbours. “They often treat us like a separate country—it’s far easier for us to work in the U.S. than one province over. When someone refers to you as ‘your own country’, you can imagine the strain that gets put on business relations,” Eisses laments.

Nevertheless, Eisses says that Western will continue as it always has, focusing on the areas they’re good at, and offering the best possible customer service. “We’ve got customers who don’t even ask us for quotes anymore, our reputation serves us well. We’ve worked in their facilities for 30 years, and our staff is the most dependable and the strongest there is.” No doubt, Western will continue to offer superior industrial services for decades to come. For more information visit www.westernmechanical.net.