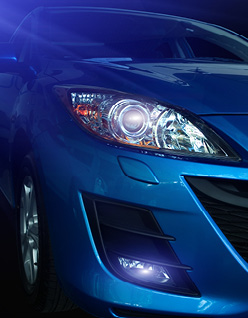 Westowne Mazda provides the latest and greatest of the Mazda brand.

Located on Dundas West of Toronto, Westowne Mazda began in 1983 and today continues as a family-run operation, managed by the father and son team of Domenic Figliano, President, who has been part of the automotive industry since the 1960s, and Niki Figliano, General Manager of Westowne Mazda. Domenic’s other son, Niki’s brother, also participates in the management of Westowne Mazda. When the Westowne Mazda dealership became available in 1983, the Figlianos jumped at the opportunity.

This month, Niki Figliano spoke with The Canadian Business Journal about the developments at Westowne Mazda, specifically about the many positives that have reverberated from the renovation of the dealership’s vehicle showroom, which will surely contribute to the continued success of Westowne Mazda.

The new, state-of-the-art showroom is showcased over two floors—the only one of its kind in all of Canada—with more than 100 Mazda vehicles on display for customers to enjoy. Building with the success of Mazda Canada’s global image in mind, the new showroom is truly original and represents the modern style offered by Mazda. The dealership has renovated its entire showroom as well as its front of building.

At its current location for almost 30 years now, Westowne Mazda highlights its unique aspect of being a family-run business, rare in the automotive industry, as reasoning to the company’s successful history. Westowne Mazda focuses on its strengths, as well as its talented staff. Figliano said, “A lot of dealerships have an owner who has five or six dealerships and that owner cannot be on location all the time. Our advantage is that we are here, and if there are customer concerns or issues, we are able to tackle them right then and there. That’s a big plus.

“I think the customer sees that we are here, that we have a passion for the business, and that we want to make the customer happy.”

The new showroom has been well received by both the company and its customers, who are satisfied and impressed with the new development. The new showroom not only offers more showcasing and more accommodating space, but also an improved lounge to keep customers satisfied and comfortable. The customer lounge is located in the showroom, allowing customers to peruse the selection of Mazda vehicles on display.

Customers accommodated the showroom’s construction period, which at times could be noisy and distracting, but was plenty worth it when keeping the finished product in mind. Figliano summarized, “It wasn’t easy. We did the renovation while operating, so we cut the show room in half, and we would work on one side, while the construction crews would work on the other, so at times it was a little tough, but our customers were great, it was no problem for them.

“Our customers were excited to see the finished product, because they have become more friends than customers as we have known them for so long.”

Perhaps most unique, however,  to the showroom redevelopment is that in a time when many in the automotive industry were facing layoffs, cutbacks and struggling sales figures, Westowne Mazda was able to focus on the future, with the exciting development that today is its new automotive showcasing.

Figliano expects that the new showroom will only further contribute to the high level of customer satisfaction achieved by Westowne Mazda. There is plenty of repeat business for the dealership, as well, with many customers returning to purchase their third, fourth, or fifth Mazda vehicles. Customers have options in where to buy their next Mazda, but are so impressed with not only the product, but the service received at Westowne Mazda, that regular repeat business has proven to be a great achievement for the dealership.

Like any in the automotive dealership industry, or any in business as a whole, Westowne Mazda prides itself on customer service satisfaction, a philosophy that has allowed the company to retain not only its customers, but future generations. Children and grandchildren of these customers often become customers at Westowne Mazda.

Figliano also thanks the dealership’s customer loyalty for allowing the company to be nearly recession proof during the tough economic times in recent years. Figliano said, “In terms of the recession itself, Mazda has some great, well-priced products, so it was positioned well going into downtimes like this.”

The dealership also went as far as adding the most economic and energy efficient products during its remodeling. Westowne Mazda is working toward reducing its carbon footprint and most important to the company is achieving its highest levels of efficiency.

And while much of the dealership’s showroom has changed, the same cannot be said for the staff on board at Westowne Mazda. Figliano said, “We have our core employees who have been here for a long time. We don’t have a revolving door. Our staff is here for the long-term, our core staff is still here, and our core values remain the same.”

From here, Westowne Mazda continues to provide excellence in customer service and to serve its community in the best ways possible. In offering its highest level of product and service, Westowne Mazda is confident that customers will keep coming back.