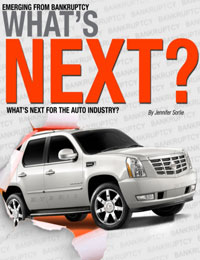 We all saw it coming. But it didn’t make the bankruptcies any less newsworthy. First it was Chrysler, filing for Chapter 11 bankruptcy protection when creditors ignored government pressure to forgive the company’s debt. General Motors followed a month later, with the biggest bankruptcy filing from a manufacturing company in U.S. history—a far cry from the global sales leader it once was.

Declaring both companies too big to fail, Canadian and American governments intervened with significant bailouts. Ten of billions were paid to keep Chrysler and GM in business and now they are owned, in part, by North American taxpayers. The money has strings, of course, and a major restructuring plan was negotiated with both the United Auto Workers (UAW) and the Canadian Auto Workers (CAW) unions. Now, these auto manufacturers are exponentially leaner, having to lay off thousands of workers, close down plants, cut dealerships and leave several brands in the dust.

Even with the restructuring, there are still no guarantees that either company will rise from the ashes as a top competitor. Prime Minister Stephen Harper actually said he doesn’t expect the money back, counting the $13 billion loan as a part of the nation’s deficit.

In light of the uncertainty, auto industry analyst Professor Tony Faria says it was worth it for the United States to intervene; after all, they have to drive their own auto industry. But what about Canada, did we make the right decision? After all, vehicles that are manufactured here are technically foreign; we don’t have a domestic industry to preserve.

As the co-director of the Automotive Research Centre at the University of Windsor, Faria sees how pervasive the auto industry is in Ontario—from assemblers to steel manufacturers to tool and die makers. “There are a lot of affected industries that you don’t really think about,” he says. “I was listening to a report on the decline in the cow hide industry because of the drop off in leather seat demand. It’s just an example of important the auto industry is to maintain.”

It’s true that GM and Chrysler provide a lot of jobs in Canada, both directly and indirectly. If they should shut down completely, there would be devastating effects on the Ontario economy—particularly in Oshawa, Windsor, St Catharine’s and Brampton. Suppliers would likely have to shut down temporarily, ceasing the supply to other auto manufacturers, such as Toyota and Honda.

With an unemployment rate of 14.5 per cent in his own city of Windsor, Faria knows first-hand how bleak the short-term consequences would be if we didn’t interfere, which is why he supports Canada’s participation in the bailout. Having said that, he admits there is an argument to be made for making the billions of dollars available to attract other car companies into Canada, letting GM and Chrysler go their own direction. Of course, this is all shoulda-coulda talk because the decision has been made, although it will be interesting to see whether Canada distances itself from the Detroit Three to favour newcomers in the future.

For now, the only relevant question is “What’s next?”

To make a solid plan for the future, it makes sense to learn from the past. The restructuring has forced GM and Chrysler to come to terms with long-time problems that contributed to loss in market share and their eventual bankruptcies. “These auto companies did make mistakes,” says Faria. “They were bloated and way too big for the market size. Through the years, they agreed to labour contracts that were outrageous, causing labour costs to be well beyond what they could afford. Recent concessions with the UAW and CAW are bringing costs more into line with their Japanese competitors.”

Their labour contracts were indeed padded, and so were their brands and dealerships. In GM’s December 2008 apology to the American people, they admitted “we proliferated our brands and dealer network to the point where we lost adequate focus on our core U.S. market”. As a part of the restructuring, GM kept GMC, Chevrolet, Cadillac and Buick, dropping the rest. Chrysler retains its five divisions.

Finally, both car manufacturers let their quality fall below industry standards, with lacklustre designs and lagging R&D. The companies are rectifying that issue with new concept cars underway. Of course, Chrysler’s partnership with Italian automaker Fiat should certainly bring something new to the table.
Are those the only lessons GM and Chrysler have to learn? Trim down the quantity and rev up the research? Some believe it was hubris that brought their market share down, as they continued to make unwanted SUVs and trucks that no one wanted. In that same apology letter, GM did admit their product bias to gas-guzzlers, saying they aim to build more crossovers and hybrids.

Interestingly, other analysts say that both companies were on the right track but were brought down by the market crash. Faria is one of the people who believes the Detroit Three were producing vehicles consumers were buying. “Fifty per cent of the vehicles sold in the U.S. are pickups,” he notes, “and that’s what they were making.”

“The American auto market is a gas-guzzling market,” he adds. “As gas prices went up, there was some move to small vehicles, but in the U.S. small vehicles are not a big part of the market. Even now, they continue to be a big vehicle nation. The market fell and that is what killed the revenue and structure of the Detroit Three. If the market of 2009 was the same as it was in 2007, I believe they would be doing okay.”

Whether it was pride or the crashing economy, GM and Chrysler suffered serious blows that will likely keep them on their toes in the future.

Waiting on the market

According to Faria, the future success of both manufacturers depends on how the market recovers. While the companies are smaller and more cost efficient now, there is problem of revenues. “GM and Chrysler have done a great job of cutting their costs, but the market is falling even faster,” says Faria. “The market has to come back and then they can be profitable again.”

There’s a lot of uncertainty in that statement because the global economy is still suffering, and there’s nothing any car company can do about it. GM and Chrysler’s survival depends on the question of when. Will the market start turning up in the second half of 2009 or early 2010, or are we going to have to wait until 2013 to return to normal?

“If it’s slow in coming back—if there’s little improvement by 2011—I wouldn’t have high hopes for Chrysler surviving through that,” Faria reasons. “GM would be in tough finances and both would need yet more infusions of government money. If things remain slow, they won’t return to break even in 2012, as they are planning in the restructuring plans.”

“Between the two of them, I would give GM a much stronger chance of coming back to profitability because they have a stronger product line-up and better quality,” Faria adds. “Chrysler is going to get smaller vehicles from Fiat but there’s no guarantee they will sell in the U.S. marketplace. There are a lot of questions about Chrysler making it.”

Outside of economic influences, Faria believes both companies have done everything within their power to make the necessary changes. They have trimmed the assembly lines and white-collar workers; reduced capacity in North America; closed plants; beaten on suppliers for lower costs; reduced dealerships to cut distribution costs; and emphasized engineering and R&D. It’s a long list and they have done a great job cost-wise to minimize. The restructuring has better positioned GM and Chrysler to be profitable in the future.

Now, we play the waiting game. The automakers have to get through the rest of the year, which will likely see sales that are 50 per cent of what they were in 2007. To be fair, it’s not just North American cars that are taking a hit. “If we look at financial performance, Toyota is coming off a massive loss and so is Honda,” Faria says. “Most companies in the auto sector are losing money all over.”

When the economy does start turning around, Faria hopes they emerge successfully from bankruptcy—we all do. Of Canada, he says he hopes our country, and Ontario in particular, continues to have a strong automotive industry, even if it is based on foreign-make branch plants. “I would like to see Canada attract more Japanese and South Korean companies, and maybe in the future, Chinese and Indian automakers,” Faria says. “It would be better to have a wider range of assemblers.” Maybe that’s Canada’s lesson in all of this, perhaps it’s time we rethink our reliance on the United States for the survival of our industries. 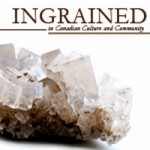