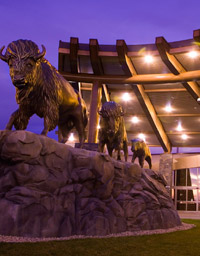 Presently, about half of Whitecap Dakota’s members live on the group’s reserve land, and they have carved out an existence through development spanning the last century.

The Whitecap First Nation people began living on the land and supporting themselves by farming, but soon realized that the Saskatchewan soil wasn’t ideal for traditional land development and turned to cattle farming.

Lately, Whitecap people have turned to much more sustainable means of economic development, spurred by a growing tourism and hospitality industry in Saskatchewan.

Current Whitecap Chief Darcy Bear has a lot of experience working on economic endeavours—Chief Bear has been dedicated to First Nations people for more than 15 years, and grew up in Whitecap. He holds a Business Administration Certificate from the University of Saskatchewan and, in 1991, was elected to the Council of the Whitecap First Nation, becoming Chief in 1994.

This is the Chief’s sixth term and he has been a huge proponent of developing and sustaining a comprehensive Economic Development Plan and a Community Sustainability Plan for Whitecap. Bear was instrumental in the creation of the Dakota Dunes Golf Links Championship Golf Course in 2005, Dakota Dunes Casino, and many other development projects.

One of the most successful projects developed by Whitecap in conjunction with Whitecap Development Corporation (the group’s holding company for investments) is a casino/resort project, as a result of which 1,000 acres have been zoned of the reserve lands for commercial development.

The cornerstone of this large-scale project is the Dakota Dunes Golf Links golf course. The course was awarded “Best New Canadian Course, 2005” by Golf Digest magazine, and Chief Bear says that this has been a proud achievement for Whitecap First Nations considering the multitude of award-winning courses across the country.

Chief Bear says that having the golf course “ranked number 17 in the country out of 3,500 helped the community to attract business,” and that ultimately, this bodes well for further economic development. The community sought the help of other local communities to assist with the development of the course. “We haven’t done it alone, we had to do it with partners,” Chief Bear says, and so Whitecap brought in other First Nations who have business development experience like the Prince Albert Grand Council, Kitsaki Development Corporation and Muskeg Lake Cree Nation.

The golf course is sure to impress any avid golfer, and Chief Bear can attest to the business that will come of future development of the resort, which will include additional golf holes, a campground and retail services.

Whitecap Development Corporation has helped the Whitecap First Nation pursue projects that have proven to be positive assets to the community. And during the recession, Whitecap fared better than many communities—Chief Bear says that they haven’t had to lay anyone off. However, seasonal disruptions have played havoc on certain projects. This year, for instance, the golf source saw less business because of the rain. “The rain has been delaying a lot of projects,” he explains. “Overall, precipitation has caused more problems overall than the recession.”

Whitecap has also wanted to announce the hotel project but acquiring financing has been slow—not surprisingly. The hotel project will add many benefits to the community, including the addition of 100 jobs. “For a community of only 300 people, 100 jobs is significant,” Chief Bear explains. Of course, adding on to the resort community means more than just building accommodations. Chief Bear says Whitecap is “looking at the type of amenities that will be required with that massive resort community we’re building.”

In addition, Whitecap is conducting a feasibility study with a corporate partner to see if they might be able to build a business park. Chief Bear says that after Whitecap announced they would do a business park, “right away we had eight businesses inquire about the development,” from manufacturing companies to financial services outfits. Once the feasibility study is complete, he says that Whitecap will “do a full business plan and go forward.”

This much development requires partner support, Chief Bear explains. So Whitecap keeps close ties to municipalities, such as the city of Saskatoon, other First Nation groups, and the Saskatchewan Chamber of Commerce. “We work together to make our region stronger, but also so show Saskatchewan how you can get rid of an archaic piece of legislation (the Indian Act) and how doing so can mobilize a First Nation community,” he explains. Whitecap, according to Chief Bear, has “a lot of things invested to bring business here.”

One thing Whitecap still needs to work on is getting banks “comfortable in investing in First Nation land,” according to Chief Bear. “It’s got to make sense for those partners that want to get on board. We want them to be happy.”

A big part of Whitecap’s development and business attraction strategy is the infrastructure services available to support the community. Whitecap is located along Provincial Highway #219, which provides direct access (a 20 minute drive, according to Chief Bear) to downtown Saskatoon to the north and to recreational opportunities at Lake Diefenbaker to the south. Roads are continually being upgraded, and the community has a new water treatment plant for commercial and industrial use.

Reserve lands are served by provincial electrical and natural gas utilities and Whitecap has a fully equipped Public Works Department.