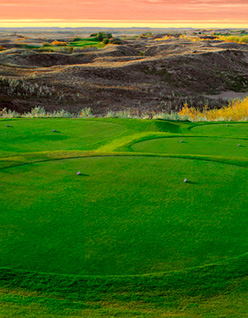 Build it and they will come

In recent years, major developments have occurred in the form of the Dakota Dunes Resort, which includes Dakota Dunes Golf Links, developed about seven years ago.

When developed, Dakota Dunes was ranked as the best new golf course in Canada. Today, it remains with the Top 20 rankings nationwide for public golf courses. A large, lake style course, the terrain of Dakota Dunes is rich with sand, uncommon for the area, ideally located just south of the provincial business hub of Saskatoon. The course offers plenty of natural beauty and space, developed over more than 240 acres.

Dakota Dunes Golf Links and the Dakota Dunes Casino represent just two of the many developments occurring under the vast Whitecap Development Corporation, however.

The third stage of development is the Dakota Dunes Hotel, a 161-room, full service accommodation. Complete with spa, a restaurant, a pool, and meeting facilities, it is an investment that Whitecap Development Corporation hopes to break ground on within the next six months. Tied-in with this is a resort-residential phase, with the current planning hoping to develop 355 residential units—a combination of condominiums, townhouses, and single family homes—which will only further add to the economic feasibility and increased tourism of the Whitecap area. The resort-residential development is something that will also bring more retail to the area, according to Darrell Balkwill, CEO of Whitecap Development Corporation.

“With the tourism traffic and the additional people living in the residential, that will drive more retail amenities too. That’s part of the master plan within the community,” Balkwill explained. “The bigger picture for tourism is that we have developed a regional tourism strategy with the different rural municipalities and towns, the City of Saskatoon, and we’ve developed a corporation called Diefenbaker Destination Developments.”

Diefenbaker Destination Developments is named after Lake Diefenbaker, a body of water south of Whitecap which offers one of North America’s rare fishing lakes. Tying in with Whitecap Development Corporation, Diefenbaker Destination Developments offers a regional focus to the area. As such, the highway which runs from Saskatoon, through Whitecap, to Lake Diefenbaker has been appropriately renamed as Chief Whitecap Trail, paying homage to the First Nations community. The renaming also plays a part in the region’s tourism strategy.

With any business development and investment, the No. 1 goal is profitability. Economic prosperity is critical, and tourism and employment generation for the whole region is an added bonus.

Today, Whitecap Development Corporation works on the latest addition of its master plan to drive both recreational tourism and cultural tourism to the community. More than 1,000 acres of land in the community have been earmarked for commercial developments.

While the focus remains on developing and executing its resort tourism strategy, Whitecap Development Corporation plans to diverse its strategy to include manufacturing, setting aside about 40 acres of land to be developed into a business park area, known as Whitecap Trail Business Park.

Currently under market analysis and feasibility, the park project hopes to attract manufacturing and light industrial work. Getting the ball rolling, Whitecap Development Corporation has established two of its own businesses: Dakota Vehicle Systems, which markets vehicles for military, homeland security, and security monitoring, and Dakota Technologies Corporation, a research and development corporation specializing in vehicle design. Both companies are part of a focus to attract aerospace and defense companies to Whitecap.

Balkwill summarized, “We’ve spent a lot of time and money trying to establish a solid business development and investment environment at Whitecap Dakota First Nations. So far, all of our investments have been in partnership. We have brought in other partners and that’s what we’d like to continue to see, more partnerships and more investments by outside groups and business development by outside groups. We are open for business.”