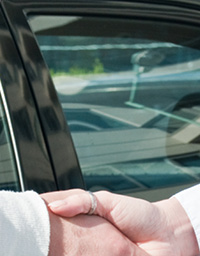 Who pays for medical expenses following an automobile collision?  How could a small scratch from a fender bender end up costing the system $250,000 in insurance claims?

These are some of the questions addressed in a new consumer awareness campaign launched by Insurance Bureau of Canada (IBC) that includes television,

The objectives of the campaign are to stimulate feedback from drivers and other stakeholder groups on how to bring down the cost of auto insurance premiums in the Ontario and to make it easier for consumers to understand their own insurance policies.

Standing in front of two wrecked vehicles – IBC’s own version of a “staged collision” – the Bureau’s VP for Ontario, Ralph Palumbo, says “It’s all about public awareness. We want to promote awareness for Ontarians on what drives up their auto insurance costs, what goes into pricing their policies. Quite simply, claims costs drive premiums. Until we can get costs under control we will continue to have premiums that we all agree are too high.”

Since 2010, the insurance industry has been working with the provincial government on reforms to the Ontario auto insurance product. The government has made important changes to auto insurance in the last couple of years designed to lower costs.  And they continue to work toward more reforms.  According to Palumbo, “More work needs to be done, but we continue to need Ontarians’ input along the way.”

“Everyone – including the insurance industry – is in agreement on one thing: auto insurance in Ontario is far too high. Consumers are paying too much for auto insurance and this is creating financial hardship for people — especially families who have kids that drive,” adds Palumbo.

“Insurance premiums are driven by claims costs and right now costs have been driven through the roof in Ontario as a result of fraud and abuse in the system,” Palumbo continues.  “Recently, in the news we have seen cases of staged collisions, fraudulent private, for-profit health care clinics and others looking to capitalize on the rich benefits available to Ontario drivers.  One criminal gang netted an estimated $25 million.  This has to stop,” he states.

A simple message, according to Steve Sanderson, President of Accident Support Services, is when in doubt, talk to your insurance representative.

“You have paid your insurer to give you advice and help you through your claims process,” he advises. “Be very wary if anyone recommends to you a body repair facility, or the services of a paralegal, lawyer or medical clinic. This is often indicative of a scam.   If you are towed to a collision reporting centre in Toronto, leave your vehicle at the centre and have your insurer arrange the tow. We offer 24 hours free storage so that you do not face any additional expense for leaving the vehicle.”

In an attempt to gain insights into consumer attitudes and knowledge of their insurance policies, IBC recently commissioned research that revealed huge gaps in consumer knowledge of how home and auto insurance works.

“And who can blame the consumer?  Average people don’t study their policies in great detail until they need to make a claim,” said Mary Lou O’Reilly, IBC’s Senior Vice-President of Issues Management and Communications.  “Add to this the fact that auto insurance premiums are through the roof because there are many players with self-interests driving up costs, so you can understand why consumers are angry and confused.”

“We are launching a two-tiered campaign for consumers to better understand insurance in general and more specifically, to explain why we, as Ontario drivers, are all victims of the growing abuse of the system,” she continues.

The Price Is Wrong

A grassroots travelling mall display will feature an installation of actual vehicles in a minor “fender bender” to highlight the high cost of insurance fraud to the Ontario auto insurance system. Consumers will get details of recent court cases in which people involved in minor collisions were convicted of making fraudulent insurance claims for medical benefits, housekeeping and income replacement totaling many thousands of dollars.

While the display is in the local mall, a radio call-in show will take place to answer insurance questions and invite consumers to talk about Ontario auto insurance issues. The conversation will focus on how to improve the system. This consumer input will inform the direction of a multi-stakeholder insurance forum is in also in the works to discuss the ideal auto insurance product for Ontario.   The cities we will visit include Kingston, Windsor, London, Thunder Bay, Kitchener, Brampton and Scarborough in the Greater Toronto Area.

The results of the polling research, which was commissioned by IBC and conducted by Pollara, zeroed in on questions that are most confusing for consumers.

“This allowed us to target topics that people want to learn more about,” says O’Reilly.

The campaign presents information in small bits by featuring friendly cartoon ‘critters’ who each pose one insurance-related question. For the answer, and additional important information, viewers are directed to ibc.ca.  Several 15-second television spots will run from July 26th until the end of the year on Ontario networks including Global and Omni as well as national specialty networks such as Discovery and W.  The campaign will also be supported by Internet ads, billboards and a mail drop.

“The Insurance Brokers Association of Ontario (IBAO) fully supports the efforts of IBC in developing and launching this consumer awareness campaign in Ontario,” notes IBAO CEO, Randy Carroll. “We believe it is imperative that consumers better understand their auto coverage, and IBAO brokers continuously strive to help their clients better understand their policies, and specifically conditions and circumstances that effect rates. IBAO is delighted at the opportunity to work together with industry partners, like IBC to better educate the general public in this province on the topic of auto insurance.”

In concluding his remarks, Palumbo noted that the government has made important changes to auto insurance in the last couple of years.  All were designed to bring down costs.

“The reforms are starting to work but there are still outstanding issues to be resolved. To reduce premiums for Ontario drivers we need to tackle these issues.

We need to maintain the momentum of the ongoing reforms.”