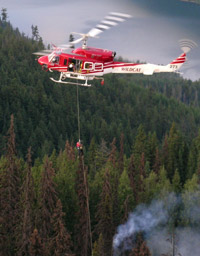 The best in aerial firefighting

Founded in 1998 by engineer Mike Michaud and Cheryl Michaud, Wildcat Helicopters is company that was created with a vision of having a long-term, stable environment where employees could thrive. Twelve years later, Wildcat is certainly succeeding in its goal of prosperity, serving a global marketplace.
While the company’s philosophy hasn’t changed, its offerings have. Once a jack of all aerial trades—covering a range of oil and gas, logging, media and tourism services—Wildcat Helicopters now focuses all of its energies on airborne firefighting.

The decision to turn to the firefighting market came six years ago. “We were at a crossroads about what we were going to do with the company,” says Ian Wilson, general manager. “Mike and I wanted to build a company, not a mom-and-pop shop. We looked at the firefighting market and decided it wasn’t being well represented by the helicopter community; rather, it was being used as a secondary money-making avenue when oil and gas exploration, mineral exploration and logging markets were down. So we wanted to support worldwide firefighting agencies in a way that no one else had done before.”

To succeed in this market, Wildcat Helicopters made a conscious effort to become a service-oriented company, which meant listening to clients. Instead of pursuing a short-term vision of earning a quick buck, the company talked at length with many firefighting agencies and learned about the industry’s needs and expectations. “We continue to do our best to respond to those needs, taking the overnight fortunes out of it,” maintains Wilson. “We have made a long-term, stable income platform that we could build the company on.”

Armed with a wellspring of industry information, Wildcat Helicopters also acquired highly specialised equipment that is found nowhere else in North America, and only in a few selected companies worldwide. “We have set ourselves apart in every way,” says Wilson. “Our aircrafts work more on firefighting operations than anyone else in the country, if not the world. Our aircrafts are the best equipped for the job they do.”

With such a dangerous job, Wildcat Helicopters has to prioritise safety. “Our motto is ‘safety, innovation and service,’ and it’s in that order,” Wilson affirms. “Safety is number one. If your team isn’t safe and your equipment isn’t safe, the house of cards crumbles.”

On the staff side, Wildcat is very proactive in training the crew. “We train more than anyone,” says Wilson. “The Transport Canada requirements call for around three hours per year for training, and we put in an excess of 20 hours per year for our pilots. We also put our engineers through recurrent annual training courses, which isn’t the norm in the industry.”

As for equipment, the company has it covered. “We were the first fleet to install and operate the BLR Aerospace FastFin System for our Bell 212s,” he adds. “The system is a helicopter performance and safety enhancement that decreases fuel usage, increases lift and increases stability; they are proving to be very successful for us.”

Safety and service are certainly keys to Wildcat Helicopters’ success, but there is one more ingredient that has solidified the company’s future, and that is a cooperative company culture. In an industry that has lavished attention and money on pilots, Wildcat is careful to remember its engineers, as they just as important as anyone else on the team.

“We have made an effort to keep the pilots and engineers equal in stature in the company—in client contact, responsibility and in remuneration,” Wilson explains. “Engineers are assets in their differences from pilots. When we send aircrafts overseas for work, it doesn’t matter how good your pilot is, at the end of the day, if the craft is unserviceable because the engineering is subpar, you’re grounded. If the pilots are given the best possible aircraft, there’s no reason not to excel.” The harmonious working relationship that the staff has on the field brings itself across to Wildcat Helicopters’ clients. The result is a group that does a great job for the end user.

Well positioned for the future, the company is looking ahead with a fifteen-year plan. “We are looking for long-term, steady growth; we don’t want to be the biggest in the world, but we want to be the best. Some say we’re anal in the way we do business,” Wilson laughs, “but we really pay attention to detail and, in our minds, that is how good business is done. It takes a lot of effort to get work, but it’s very easy to lose it. And that mindset is what we train our crews and management staff with.” It seems Wildcat Helicopters has found a solid, working formula. If the company continues in its current path, Wilson believes it’s only up from here.