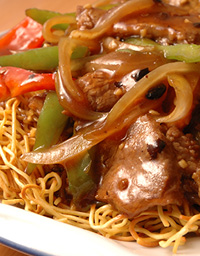 Beginning with its original location in Edmonton, today Wok Box has nearly 60 stores across Canada. Following its Edmonton debut, Wok Box opened a few selection locations before then expanding to Brandon, Man., to test the rural market volatility of the restaurant chain. Naturally, the Brandon Wok Box proved successful, getting the local ‘thumbs up’, and further implementation of the Wok Box business system was born.

The chain has grown throughout Western Canada. Next up? The rest of Canada. In recent years, Wok Box has turned its attention to the eastern provinces, specifically Ontario—the largest Canadian market—as well as expansion into the United States.

Founded in 2004, Wok Box is operated by Scott Bender, CEO, and Lawrence Eade, CFO, who this month spoke with The Canadian Business Journal on the success of this distinct restaurant chain and how the company plans to further its recent growth trend through its exciting business concept.

“We started franchising about four years ago, and the popularity is that in the Asian sector, you have your typical food court restaurants, but there really was no street front, organized chain. We saw a niche that wasn’t being touched,” Bender said, “and that is how the popularity of stir fry and healthy food took off as the core of our business. The popularity of the noodle box has had us grow faster than we thought.”

“We held back on Ontario until we were ready to grow into it. It’s the biggest market in Canada and we wanted to make sure we had our systems in place before we entered,” Eade said.

In Ontario, the first Wok Box opened in London, with a second location following shortly thereafter. A third Ontario location recently opened in the Greater Toronto Area, based in Mississauga.

“We’re looking to do the bedroom communities surrounding the GTA, getting a good note of stores to service so that we can build up brand awareness,” Eade said, speculating that, with the next 12 months, Wok Box hopes to open 10 to 15 more stores in Ontario, in locations such as Kitchener-Waterloo, Burlington, Hamilton, and Windsor.

And while the focus certainly is on Ontario expansion, that hasn’t stopped the company from exploring foreign opportunities as well. Outside of Canada, Wok Box has one location in Beirut, Lebanon, where a former Northern Alberta oil worker was interested in international expansion within his Lebanese homeland, feeling the Wok Box brand would perform well in the Middle East.

Truly an Asian experience, Wok Box offers it all, a diverse menu that includes more than just the Thai experience, or the Vietnamese experience, with a menu that spans 10 countries.

Wok Box isn’t your typical quick serve restaurant. For dine-in eaters, the restaurant presents comfortable seating and a nice atmosphere. The format in which the eating experience is presented is much higher than the standard quick service.

With that, Wok Box emphasizes its healthy menu, believing that its diverse customer base truly appreciates its array of freshly prepared food choices.

“There is a mindset that we are a healthier alternative to a McDonald’s or even a Subway to some extent. We approached the Heart and Stroke Foundation and four of our items meet their criteria, including a kids’ meal, so that is great news,” Bender said, adding that, this month, Wok Box will launch its new menu that features the notable Heart Check stamp of approval.

“We are the only Asian food chain in Canada to have any items on the Heart Check list,” Bender beamed. “Asian products are difficult, as they are not associated with healthy products…there is a lot of salt, there can be a lot of sugar, especially in Western Chinese places, so it allows us to say that this product is healthy, marked by a very recognized association.”

“We’ve always thought that our game plan is to get a couple hundred stores in Canada, and to keep building. Expansion [into the United States] is time consuming and expensive, and may look easy, but we have a lot of work to get there,” Bender concluded. “We’re ready to roll and there are lots of promising leads so hopefully the growth in the next five to 10 years in the United States, and internationally, with Canada built out, should be going a little bit bigger as well.”