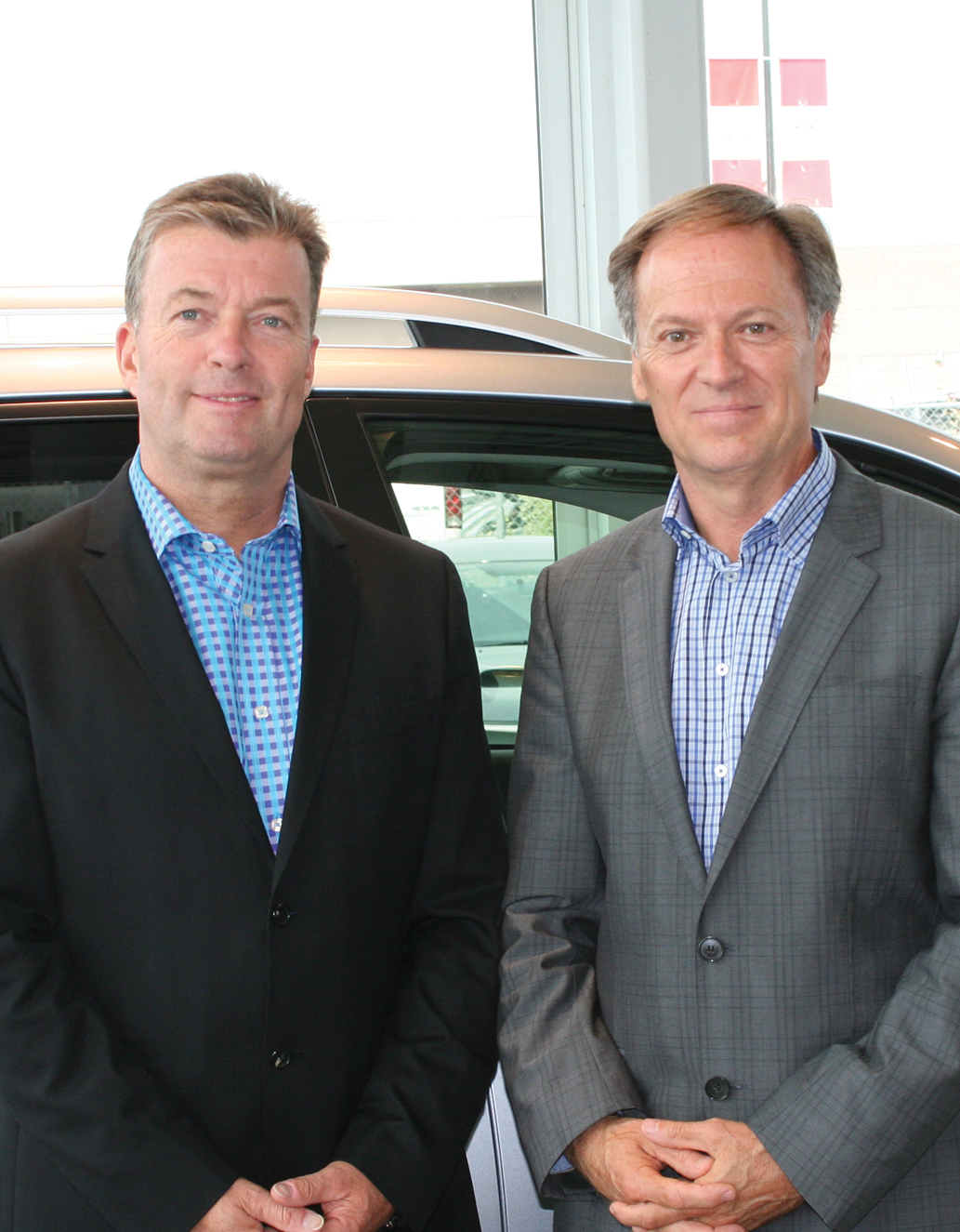 The roots of the Wolfe Auto Group go back to 1921 when F.J. Wolfe opened the first family dealership in Edmonton – Edmonton Motors (originally located at a spot that’s today occupied by City Hall). The dealership is led by Robert Wolfe, the older brother of Gordon Wolfe, who sold his stake in the business after he relocated to B.C. in 1987. Here he created a whole new Wolfe venture – Wolfe Auto Group.

Wolfe partnered with Michael Hacquard, General Manager of Operations, in 1989, and this enduring partnership saw excellent business growth as the market offered great opportunities in the market for Japanese brands. Wolfe and Hacquard moved the business quickly through a series of changes, acquisitions, and construction projects (building four new stores in the last five years alone), and today, the company owns four dealerships in Lower Mainland, B.C., Mazda, Subaru and Mitsubishi in Langley, and the oldest Mazda dealership in Canada located in Chilliwack. But Wolfe and Hacquard are not quite done yet, as they plan to open several new dealerships in the near future, focusing on B.C., a market that always favoured Japanese brands. That’s one of the reasons why the company’s four dealership still offer the best in Japanese automotive excellence – Mazda, Subaru, and Mitsubishi – brands that cater very well to this market.

Mazda is generally recognized as a benchmark for the rest of the “Made in Japan” brands, and has a solid customer following in Canada. Mazda customers have faith in the brand’s exceptional fuel economy, with its SkyActiv technology more powerful and a more fun to drive product that remains highly fuel efficient.

This brand is a staple of the B.C. market and Wolfe Auto Group remains faithful to this quality brand while expanding toward the more premium brands.

“Subaru has not been a major brand when we took it on, but it was a niche player, and I saw the management of the company was changing at the time. The current management has done an amazing job bringing that brand into the mainstream. Subaru is one of the fastest growing Japanese brands, and currently well exceeds more than 33,000 units sold in Canada (it was 10,000 when we took it on). Their dealer body is relatively small, and I see the Subaru growth projections reaching some 50,000 cars in Canada within the next two to three years. So we see rapid growth and we are hoping to expand with Subaru to another marketplace soon with a second franchise in Greater Vancouver,” says Wolfe.

Mitsubishi Motors, a part of the Mitsubishi Group of Companies industrial conglomerate, has been reinventing the automotive industry since 1917, and Wolfe Auto Group has a been dealer since 2003, when Mitsubishi entered the Canadian market, bringing great vehicles and great driving experiences. With years of innovation, Mitsubishi was the first car producer to introduce the 10-year warranty of its products.

“The 2014 models are excellent, and I see great potential in these products. The Outlander is selling well, and the new Mirage subcompact has just arrived last week, and it has the best fuel economy in the industry. I see great things ahead for Mitsubishi,” says Wolfe, and he puts his money to his word, as the company is currently in the process of doubling the capacity for its Mitsubishi dealership, and this construction will commence shortly.

Between the four dealerships, Wolfe expects to sell 2,200 new vehicles and over 1,000 used vehicles in 2013. With the opening of the Port Mann Bridge and the widening of the Trans-Canada Highway to Abbotsford, Langley is becoming a more dominant economic player in the region with many new car sale opportunities. That’s why Wolfe also plans to add two more stores in the next 18 months. “In our industry it’s definitely an economy of scale, and it’s difficult to amortize the overhead expenses between one or two stores. Growing our marketplace by expansion offers an opportunity to increase efficiencies. For example, we will only have one central accounting department that processes all of our current and future transactions.”

According to Wolfe, this ongoing growth and success would not be possible without the strength of the Wolfe/Hacquard partnership. For 25 years this working partnership has been capable of compromise and always considers all aspects of the operation when making business decisions. “Michael and I always have our staff in mind when we make decisions because we consider this a family business,” says Wolfe. With the four stores, Wolfe Automotive Service employs over 100 staff, with over a dozen staff that have been with the company for more than 20 years.

The company success has also been closely tied with good relationships with its financial providers. According to Wolfe, whenever the company planned to expand, the financial institutions have been there for Wolfe Auto Group. “We have built four new facilities in the past five years, and that had put strain on our capital requirements and our banks have been with us all the way,” says Wolfe.

In addition to Wolfe’s expansion, the team has spent most of 2013 revamping the company’s website and concentrating on optimizing their online presence for each of the stores with new user-friendly features to better serve customers and employees. These upgrades include a live chat feature, mobile capabilities, value trade in modules, a virtual service consultant and advanced inventory search.

“As the Internet continues to gain popularity as the primary outlet, source, and medium for consumers to educate themselves about new cars and trucks we wanted to reassure our customers that we remain committed to helpful, responsive customer service. The website re-launch has allowed us to better serve and engage with our consumers with providing our employees with the tools to do so.”

While the company drives towards growth, Wolfe plans to retain the family feel of the business and remain closely connected to the customers. “Our customers are the success of the business, and we don’t want to lose the contact. The difference between us and other dealerships is that Michael and I are always available to speak with our customers directly. We are both actively involved in the day-to-day operation. We like to be on top of things and we get involved if it’s necessary to resolve problems and satisfy our customers.”

While Wolfe and Hacquard start to plan the business succession, passing the torch to the fourth generation, with Wolfe’s two daughters and Hacquard’s two sons entering the business and taking over the operation in the upcoming years, the business continues to succeed, providing exceptional services and quality automotive brands to the market that’s ever-interested in the “Made in Japan”.