Home | Features | August 21 | Skyrocketing Home Prices: When Will it End?

Skyrocketing Home Prices: When Will it End?

Despite a global pandemic that has ravaged healthcare and economies the world over, by far the most resilient aspect of the past 18 months in Canada has been the overheated residential real estate market. In spite of millions of people having been laid-off – some temporarily, some permanently – a record number of people still found an ability to purchases homes at an increasing rate and at costs never seen before in the history of this nation.

Words such as ridiculous, insane perplexing and mystifying are just some of the adjectives being uttered in describing the current real estate landscape, especially those people who had hoped to enter the real estate homebuyers’ market. On the other side of the coin, home owners have salivated at the prospect of being able to sell their homes for double, if not triple, the value they would have received just a few years ago.

In spite of skyrocketing prices there is still little – if any – sign of such a fiery course abating anytime soon. Those who find themselves shut out of the market due to the astronomical increase in prices are clinging to the scant hope that the market will eventually cool off and prices will contract significantly. While most economists and financial experts fully agree that the rate of ascension by which home prices have soared will most assuredly level off, it’s quite another thing to expect prices will then decrease. It seems as if a best-case scenario would result in a stabilization of prices where they now stand, with a marginal decrease not beyond the realm of possibility. As one economist stated, if prices went up so drastically throughout a global pandemic, with fewer people working, how can we realistically expect that home prices will go down when more people are back working earning an income. It could result in even more people bidding on homes.

According to a recent survey, one-third of all Millennials (ages 25 to 40) say they’ve already given up hope of ever owning a home. Another one-third remain hopeful, but admit they face numerous obstacles if they hope to attain their dream, while the other one-third either already have purchased a home or say it’s definitely in their future plans.

Think back just two generations. It was virtually unheard of for parents to have housed their 28-year-old adult child with them. Now, it can often be the adult offspring along with his or her spouse and sometimes children as well. It’s the economic world we live in.

The current housing crisis has been caused by several macro instigators, including, but not limited to: a lumber shortage, which sent prices for plywood through the proverbial roof; a desire by established home owners to change their living arrangements, and the ability for many people to be able to work from home due to the pandemic.

On average, home prices have accelerated by more than 20% annually over the past few years. However, some established urban regions are seeing numbers far greater than that. Take Hamilton, Ontario for example. In the latest quarterly report, home prices in the Steel City went up by an average of 28%. In other words, a home that cost $400,000 at the start of April of this year sold for $512,000 by the end of June, just three months later; an astronomical $112,000 upsurge.

Gone too are the days where it was the usual suspects where home prices seemed ridiculously disproportionate with the rest of the country. Vancouver, Toronto, Ottawa, Montreal and Calgary continue to lead the way, but home prices in smaller urban centres are now also demanding – and securing – exceptionally high final selling prices. If you want a bargain you’ll need to look long and hard, and even then it’s doubtful some other ambitious folks haven’t already beaten you to the punch.

According to figures released by Statistics Canada, homeowners took out $18 billion in new mortgage debt from lenders in April, bringing the cumulative total debt to about $2 trillion. Mortgage debt has increased by nearly 8% over the past year and it’s gotten more expansive heading towards the end of summer.

It means Canadians are doing anything and everything then can to get into the home-buying market. That unto itself is an excellent stance to take because there is no better investment than a home. The downside is that people will over-leverage themselves. It may not be apparent now, but the house of cards could crumble for many now teetering on the precipice if interest rates were to creep up even by the smallest of margins.

A number of factors have led to the perfect storm of housing price increases. First, there was a supply shortage. Not nearly enough homes were available for sale compared with the number of people looking to purchase. It has been the same for detached, semi-detached townhouse rows or condominiums. Shortages in all home types then led to a number of very aggressive bidding wars. There has also been the previously mentioned lumber shortages, making the construction process that much more expensive when building new homes. Developers, contractors and construction companies had no desire to absorb the higher prices, so they got pushed onto the buyers.

The pandemic and the offshoot of many companies allowing employees to work from home also pushed prices upwards, again due to a supply vs. demand issue. Many people who worked and lived in cramped quarters in large urban cities realized they could have a much more spacious living conditions and a better quality of life by moving out of the crowded downtown core for a cheaper price further out in the suburbs or smaller city centres. In one case, a couple disclosed how they sold their small condominium in downtown Toronto for $850,000. They found a home they liked in the Niagara Region, with a listing price of $525,000. Theirs was the winning bid at $600,000. Now they have a much larger home, detached from neighbours, and have managed to bank nearly $250,000 while still keeping their salaried positions.

In another recent case, a young couple listed their century-old home in Oshawa for $599,000. The home quickly drew multiple offers, with the winning bid ultimately paying $862,000.

Home prices have accelerated in every provincial jurisdiction but the most expensive are British Columbia and Ontario, with Alberta a distant third. As a province, New Brunswick remains the most affordable where the average home sale price comes in at just under $200,000.

Nationwide, the average home selling price has continued to soar by about 32% year-over-year for a number of months. Despite the massive rollover price increase, somewhat inexplicably, sales also continue their ascension according to the Canadian Real Estate Association (CREA).

The overwhelming supply shortage began to subside by early summer with more home units being built in most jurisdictions. It means the rapid price increases should cool down by a significant margin, but notable price declines are exceedingly unlikely.

As of June, 2021, home prices spiked in all 10 major markets that were analyzed across the country. Prices were up by at least 10% in 90% of 35 urban markets. Halifax led the way with prices spiking by 31% compared with the same time in 2020. Hamilton was next at 28%, followed by Ottawa-Gatineau at 26%. Toronto was at the low end of the scale, with a 16% increase, but given the already staggering high base home prices in Canada’s largest city, the 16% jump is still a substantial bottom-line jolt in terms of dollars required, nonetheless.

According to a report from CREA, home sales recorded over Canadian MLS Systems fell by 8.4% month-over-month in June 2021, marking the third straight monthly slowdown since activity hit an all-time record in March. While sales were off by a cumulative 25% from their peak, and below every other month in the last year, June transactions still managed to set a record for that month.

“While there is still a lot of activity in many housing markets across Canada, things have noticeably calmed down in the last few months,” said Cliff Stevenson, Chair of CREA. “There remains a shortage of supply in many parts of the country, but at least there isn’t the same level of competition among buyers we were seeing a few months ago. As these conditions continue to evolve over the summer and fall, your best bet is to consult with your local REALTOR® for information and guidance about buying or selling a home at this stage in the cycle.”

CREA cautions that average price information can be useful in establishing trends over time, but does not indicate actual prices in centres comprised of widely divergent neighbourhoods or account for price differential between geographic areas.

Nobody has a crystal ball to provide a confirmed forward-looking course in terms of housing prices heading into 2022 and beyond. However, most analysts seem to agree that the Canadian housing boom will flatten considerably next year when supply of new residential housing is made more available and mortgage rates invariably increase from the record lows where they now stand. But for those hoping to see a substantial decline in prices, that wish is almost assuredly not going to be in the cards, barring an unforeseen worldwide Depression, upon which case the world would have much deeper concerns than just home prices.

Another reason to believe the prices of today will remain a benchmark moving forward is because there was never a “housing bubble” per se. The boom was the result of frantic buying with demand much lower than supply, which in turn resulted in bidding wars for homes that produced shocking bids that oftentimes far exceeded the original asking price. Citizens pondering an entrance into the homeowners’ market also felt it was an ideal time to do so with interest rates so low, even if it meant stretching their monthly income down to the last dollar.

The Bank of Canada has continually reminded Canadians that higher interest rates are on the horizon and that they should factor that in when deciding whether to purchase a home, and also how much they can realistically afford when it comes time to remortgage a home. At 0.25%, the Bank’s key overnight trendsetting rate could ramp up by as much as a full percentage point by this time next year. On the surface, a single percentage point doesn’t sound all that daunting. But consider the fact people will owe their financial lenders hundreds of thousands of dollars, and a 1% increase in monthly payments can be the equivalent of hundred of dollars and many homeowners are already stretched to the absolute limit.

According to a report from CREA, national home sales are forecast to fall by 13% to around 594,000 units in 2022. This easing trend is expected to play out across Canada with buyers facing both higher prices and a lack of available supply, while at the same time the urgency to purchase a home base to ride out the pandemic continues to fade alongside the virus itself. Sales declines are forecast to be largest in B.C. and Ontario where prices have spiked the most. Will prices also follow suit and decline? Perhaps to a certain extent, but not likely to the point that many people will be hoping or expecting. There are so many important factors to keep in mind when making that all-important decision whether it’s economically feasible to jump into the homeowners’ market or not. For most people, it’s the biggest financial decision of their lives. 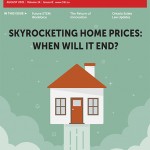