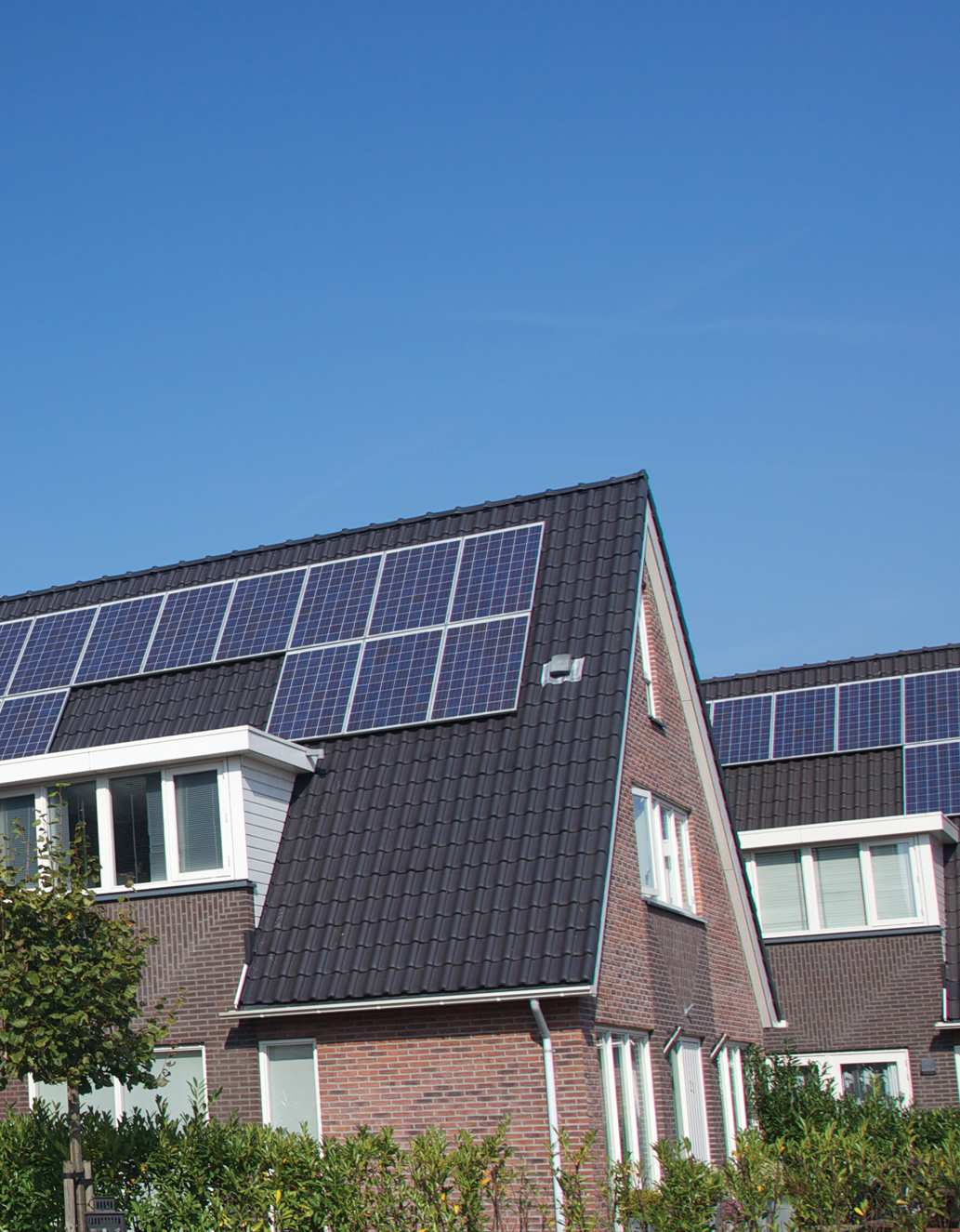 Solar panels on building roofs have become an increasingly common sight over recent years, and helped many people reduce their energy bills and carbon footprint. But solar photovoltaic (PV) devices do have a few catches: first, they have an expensive initial cost; second, they do not have a great payback; and third – particularly problematic in low-sun regions such as much of Canada – they can only produce power when the sun is shining on them.

Fortunately, not all solar panels are built equal. Those developed by British Columbia-based Solaris produce heat rather than electricity, and in doing so overcome many of solar PV’s drawbacks. The revolutionary SunPump product is primarily a water heating system that works on a heat pump principle; it uses a motor to circulate refrigerant, which collects heat from the outside environment and moves it indoors to heat space or water. Because the refrigerant is a liquid at -70C, it will always be colder than the outside environment and able to transfer heat at an efficiency of 300% or more. The motor can run 24/7 if required, providing continuous heating in any environmental conditions – whether those are complete darkness or freezing snow. Where does the sun come in? Well, the additional, perhaps occasional heat of the sun shining on the roof panel boosts the system’s efficiency up to a staggering 700%.

Solaris Founder and Chief Executive Bruce Gray is only too happy to elaborate on SunPump’s efficiency and flexibility. “Moving heat does not require creating heat, so unlike gas heating it avoids the need for combustion or generation,” he explains. “Put 1kW of electricity into the SunPump and you’ll get out 4kW of heat energy – more than that during the daytime, where demand for hot water is highest.”
As well as being highly efficient, SunPump has a “relatively low installed cost and leading-edge operational costs,” says Gray, meaning it is a highly cost-effective heating system. “Savings in the monthly heating bill add up over a short period of time, meaning payback times for the system fall between five and ten years.”

Adding Electricity Into the Mix

While the original, thermal-only SunPump product cannot fulfil all a building’s energy needs, Gray argues that it at least fulfils most of them. “For most of the year in Canada, heating is about three-quarters of a building’s total energy load; there is far more need for heating than for lighting and running electrical appliances,” he says. “In summer, the SunPump can simultaneously provide cooling – doubling its efficiency.”

However, the latest fourth-generation SunPump is a photovoltaic-thermal panel – combining the benefits of the original SunPump system with the additional capability to produce DC voltage, enough to reach Net Zero energy consumption. These hybrid panels were first trialled in a project for the Parksville and District Chamber of Commerce in British Columbia, as a retrofit installation for a 20-year-old building.

“It was a ground-breaking project in terms of innovation,” remarks Gray. “We were invited by Kim Burden, Executive Director of the local chamber, to upgrade their ageing air-source heat pump. He was open to trying out some innovative changes, so Certified Energy Manager Brian Pasquill proposed the fourth-generation SunPump.”

The eight PV-thermal panels Solaris provided produce approximately 2.2 kW of power. They use an inverter from Schneider Electric that incorporates a novel control and monitoring device called the ComBox – the first installed in North America – to perform advanced electrical management. The project served as a showcase platform for Solaris, allowing it to demonstrate its revolutionary technologies to the world. The company wants to expand upon the complete building energy concept over the next 12 months, perfecting the system’s installation with specialised hardware and streamlined installation.

“We want to start producing these PV-thermal panels more abundantly; possibly using nanoparticle graphene coatings on the panel, so it becomes like a roofing product that’s fully integrated into buildings as a standard practice,” Gray adds.

At the same time, Solaris will be further developing its non-SunPump technologies, which include air-source heat pumps, drain-back water heating systems and even software to help improve its business. Gray is particularly excited about the Live Quote software, which assists the company’s dealers in making it quicker and easier to sell Solaris products over the internet.

“Live Quote can connect a potential customer to a technician in real time and allow the technician, with as little as a postal code, to view the customer’s house on Google Earth,” he explains. “The technician can see the roof in 3D, measure it and draw the solar panels onto it, to show the person what it would look like. They can then give the customer an instant quote, discuss a package that can be adjusted in screen-sharing mode, and finally create a sales agreement that the customer can sign online. It is a completely interactive and dynamic process that remotely engages the customer with immediate answers to questions such as, how much will it cost me? Or how much will I save? ”

At the time of writing, the software is in beta stage and just weeks away from a full launch.

Filling a Gap in the Market

Solaris has plenty going on and plenty more to come. Just last month, construction began on a major eco-village project in which the houses will be fitted with SunPumps. Estimated to take around three years to complete, the Elkington Forest project is a world-first in that it will construct 77 homes in a 1,000-acre forest, with as little disturbance to the natural environment as possible. The homes will aim for Net Zero carbon emissions and be laid out in the form of a quaint, classically fashioned village.
“SunPump will work so well in this project, because unlike regular solar thermal it will work in a shaded environment,” says Gray. “Most of the houses will get direct sunlight, but the considerable periods in which they’re shaded will not significantly affect the performance.”

Gray describes the Elkington Forest project as “exciting” for Solaris and “world-class” in terms of environmental stewardship. It is one of a number of eco-village projects that will use SunPumps. Solaris’s customers are primarily HVAC contractors, developers and building owners, and it provides SunPumps for both new buildings and retrofit operations. The ultimate goal is to get SunPump accepted on a broad scale – used as the default, go-to way to save money in retrofit or new construction. Gray believes Solaris and the Canadian Solar Heat Pump Institute have already broken down some of the barriers to achieving this.

“Renewable energy is often seen as expensive, but the SunPump is considerably less expensive to install and more efficient than geothermal, and provides a more complete solution than PV alone,” explains Gray. “It’s in a position to compete with electric heating and natural gas, and that’s a game changer. SunPump can be sold on the strength of its economics, as well as its environmental benefits. People are realising that it’s inexpensive to put in and after that, the solar power is free.”

Gray’s long-term goal for the company itself is to secure a larger and better established partner company. “Our goal is to expand our thermal offerings and become an attractive partner for a major player such as Solar City,” he says. “Our SunPump heating systems will open up a whole new part of the market for them – one which their purely electrical PV offering cannot fill.”